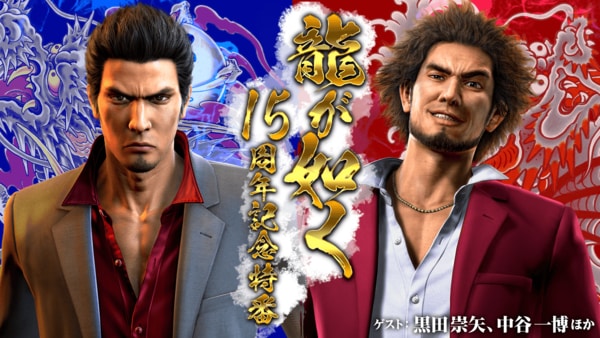 The original Yakuza game was released as Ryu ga Gotoku on PlayStation 2 in Japan back on December 8, 2005. That means we’re coming up on the series’ 15th anniversary, and Sega has big plans to celebrate on Yakuza‘s Japanese birthday.

The main event is a live stream looking back on the history of Yakuza with the help of presenters like Kazuma Kiryu voice actor Takaya Kuroda, Ichiban Kasuga voice actor Kazuhiro Nakaya, general director Toshihiro Nagoshi, and others involved in the series. There may even be some big announcements about future developments, but we’ll have to wait and see.

That one goes down on December 8 from 8:00pm to 10:00pm Japan Time, and will be available to watch on YouTube.

If you really want to fill your December with all things Yakuza, though, you’ll want to check out the 15th anniversary let’s play of the main series, which promises a 151.5-hour stream from December 2 at 1:00pm to December 8 at 8:30pm Japan Time. During the extensive session, developers and others related to the series will attempt to play through six of the main entries on PlayStation 4, from Yakuza: Kiwami to Yakuza 6: The Song of Life.

Is that enough Yakuza for ya, tough guy?