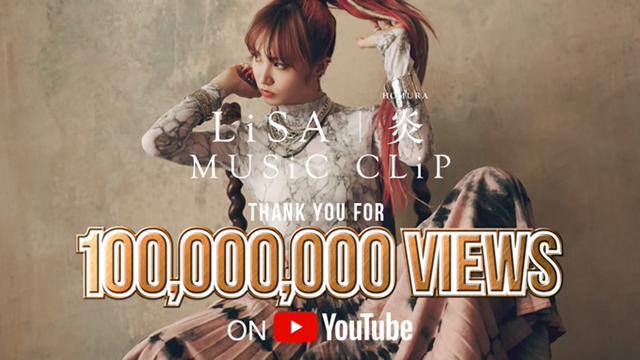 The official staff Twitter account for anison singer LiSA has announced that the five-minute music video for her 17th single song “Homura” (Demon Slayer: Kimetsu no Yaiba the Movie: Mugen Train theme song) has been viewed more than 100 million times on YouTube only in two months since October 12.

The CD single of the song “Homura” was released in Japan on October 14, 2020, then topped Oricon’s weekly single chart by selling 68,000 units in its first week to become her first weekly No.1 single in her ten-year career. It has already certified “platinum” by is shipping more than 250,000 copies.

The account has also posted a short video message from LiSA to express her gratitude to her fans.

“Hello, it’s LiSA. The music video for ‘Homura,’ which has been streamed on YouTube, has surpassed 100 million views! Thank you so much. 100 million…, what does that mean? I am really happy that this song has been loved by so many people around the world. Since the release of this music video along with the song in October, I have strongly felt that everyone has been enjoying it. We concentrated in the very limited time at dawn, and I sang with the feeling that we put our souls into each shot. We made a music video that could only have been captured in that moment, I hope you will enjoy every bit of it. I’ll be bringing you more and more great music in the future, so you can count on it! That’s all from LiSA. It’s another great day. Byechi!”