Hello everyone, and welcome back to Why It Works. If you’ve watched anime long enough, I’m sure you’ve heard some young protagonist pledge to “do their best” before a big battle. It feels like an anime truism, common to stories of young heroes who train hard, make precious friends, and then struggle to overcome their nemeses — ie, most of the most popular anime. It’s such a common sentiment that we’ve come to take it for granted; and like many narrative choices we take for granted, Hunter x Hunter chooses to examine it a bit more closely, and wonder precisely what sort of person might grow from such a philosophy. The results are worrying and undeniable: by the time Hunter x Hunter reaches Greed Island, it’s clear that there’s something deeply wrong with Gon. 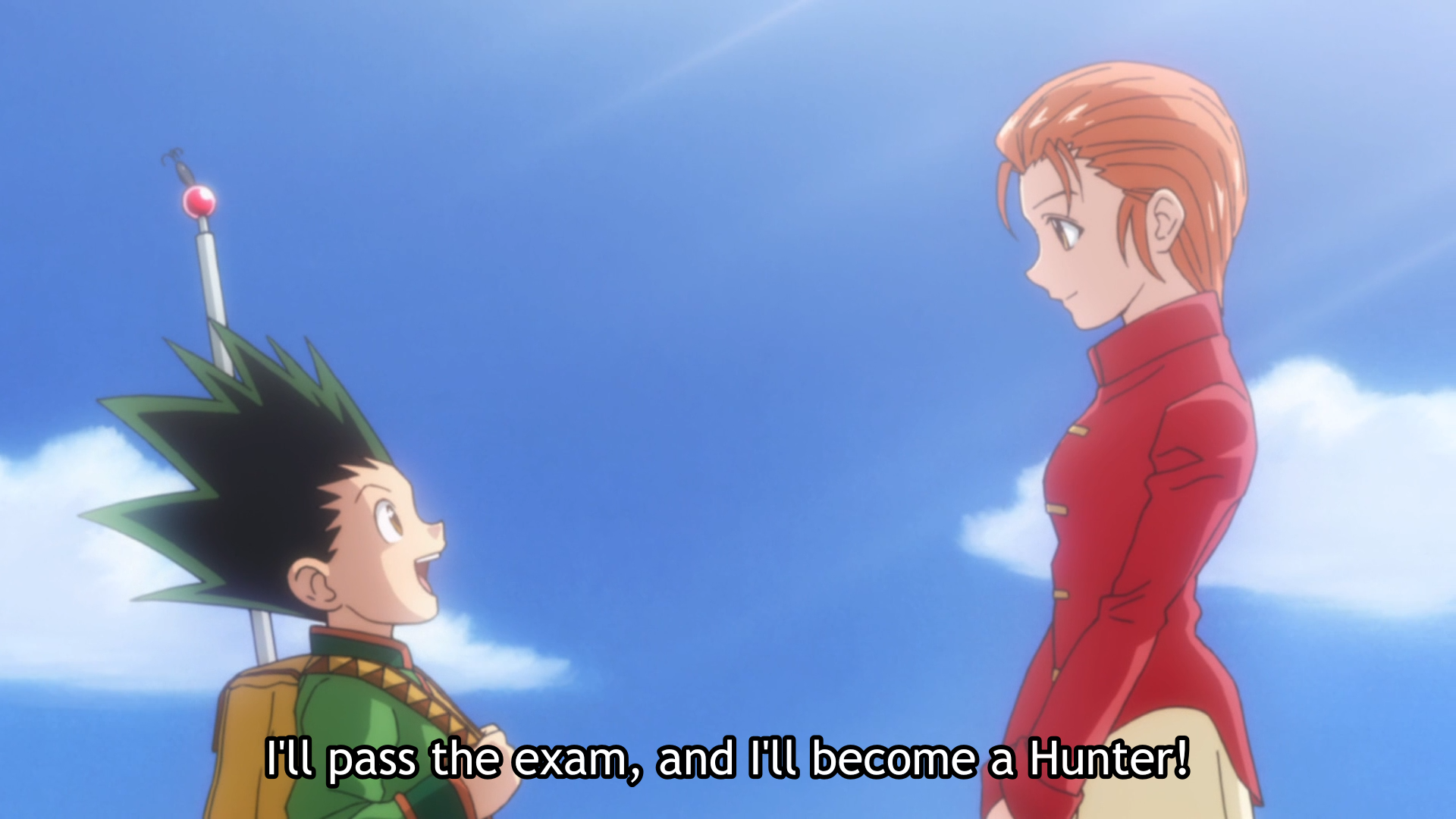 Hunter x Hunter plays its hand slowly, relying on our built-in assumptions about its genre to conceal the character study it’s actually building. Early on, it doesn’t seem strange that Gon is utterly obsessed with physical self-improvement, and becoming a Hunter as soon as possible; after all, that’s just the sort of wild, starry-eyed quest these sorts of protagonists always have. Wild ambition, fanatical training methods, and reckless self-destruction are all par for the course, so what’s so unusual about Gon displaying all these tendencies? Because of our genre expectations, Gon’s initial pursuit of the Hunter’s badge seems boyish and sweet, rather than dangerous and obsessive — and with the show’s own tone supporting this interpretation, the audience has no reason to suspect anything is wrong.

Cracks only begin to show when the true nature of hunters becomes clearer. Most people would not spend their lives dedicated entirely to becoming killing machines; that pursuit takes a kind of mania, as well as a clear disregard for conventional social advancement. But most action shows are not specific about the kind of single-mindedness that would inspire such a pursuit, so rather than populating themselves with maniacs, they set themselves inside “fight worlds.” 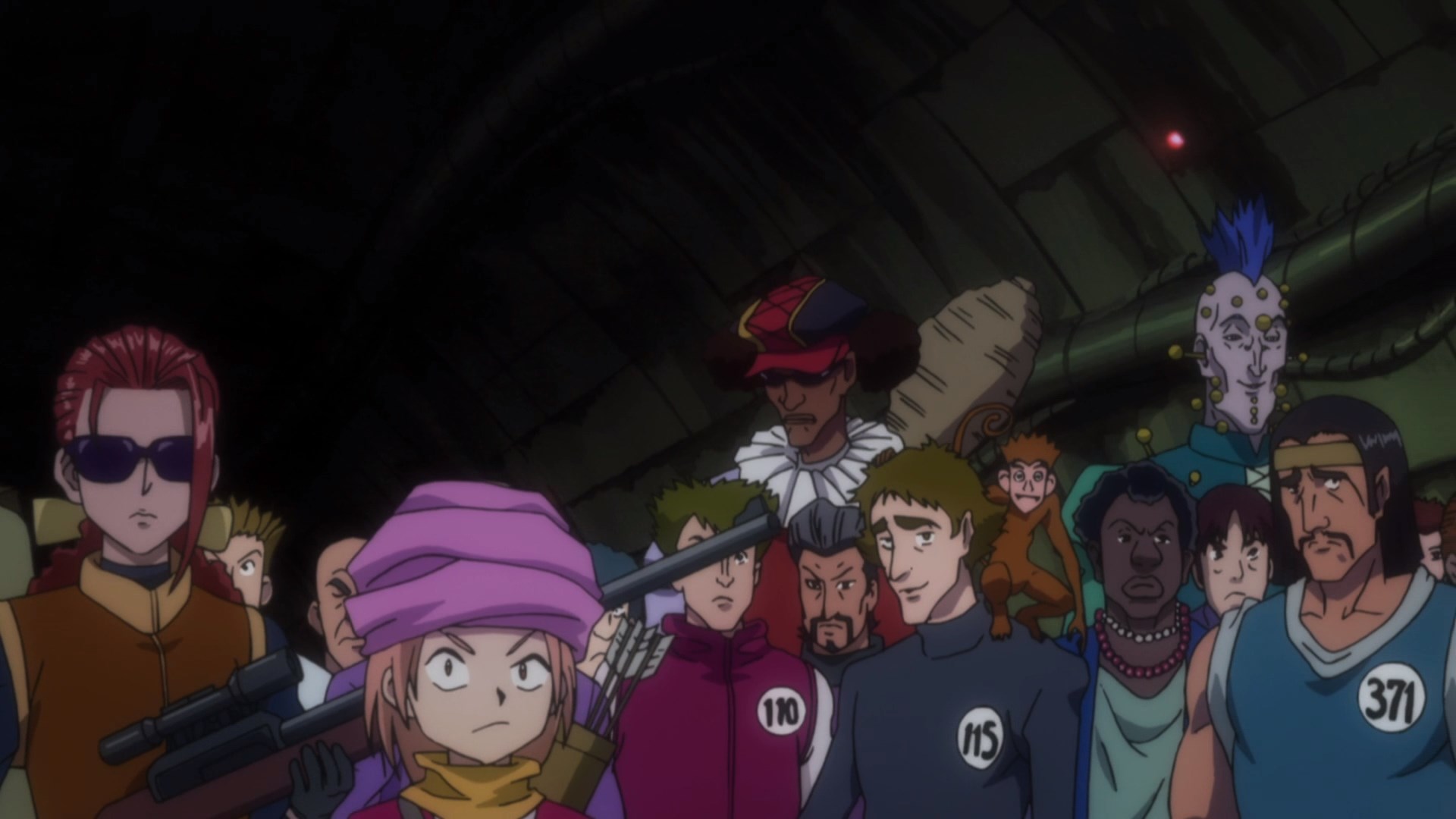 In these fight worlds, becoming an action hero is actually the standard path of maturation, be it via ninja exams or any other route. Additionally, the idea of single-mindedly dedicating yourself to becoming better at fighting is actually applauded and considered admirable by all your peers. The fighting is ultimately a metaphor, after all; the lesson truly being taught here is “commit yourself to things, and you’ll discover you’re far stronger than you expected.” Metaphor aside, the base plot of these narratives is the process of raising a generation of killing machines.

In contrast, while Hunter x Hunter is filled with similarly monomaniacal killers, it does not exist within a fight world, where such behavior is the norm. Hunters choose to become such single-minded instruments, to be people who can handle violent deaths without blinking, and who readily push their bodies to the point of breaking. Hunter x Hunter fully understands that hunters are maniacs; and Gon is one of the most terrifying maniacs of all. 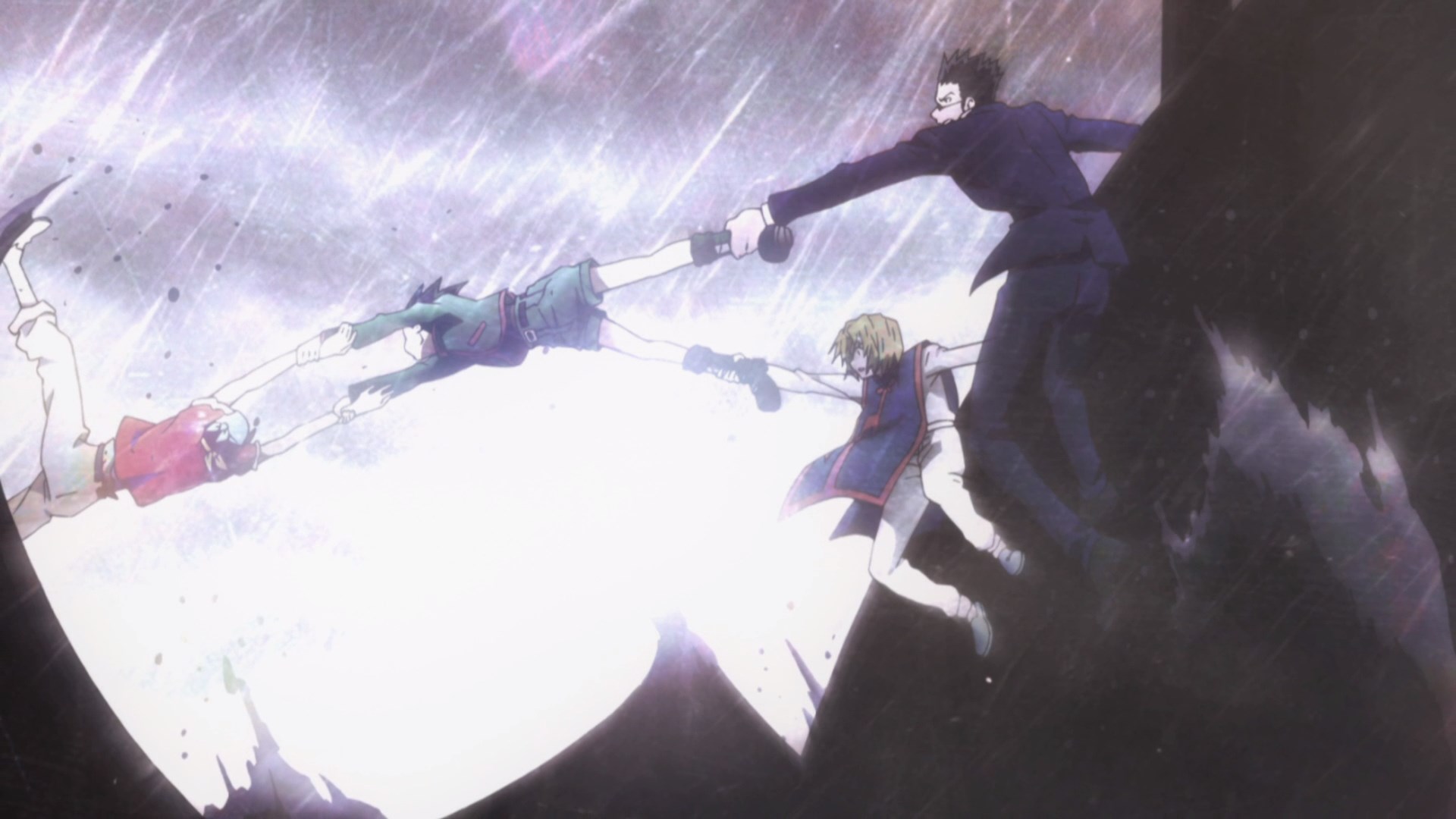 At first, assessing Gon’s strangeness requires distancing yourself somewhat from the assumptions of his genre. Gon greets death and dismemberment with a smile, but that’s just sort of what young heroes do, right? In fact, his friends actually praise him for his level-headed composure, so it must be good that he’s not freaking out, right? Of course, Killua and Kurapika have both experienced such extreme trauma that it makes sense they’re unfazed by the exam; ultimately, our only example of “normal” reactions is Leorio, who’s framed as a clown for being rightly alarmed by continuous murders.

But from the start, there is one giveaway that Gon might not be the most level-headed of heroes. Even in the show’s very first episode, he leaps off a boat in the midst of a storm, assuming others will catch him before he actually drowns. At the time, it’s framed as a brave act that brings Kurapika and Leorio together; but as time passes, Gon demonstrates again and again that his signature talent, his “ace in the hole,” is his ability to take his life in his hands without a second thought. All warriors must be prepared to die, but Gon actually seems to flaunt death, driven by an urge that sees his body as of no value whatsoever. 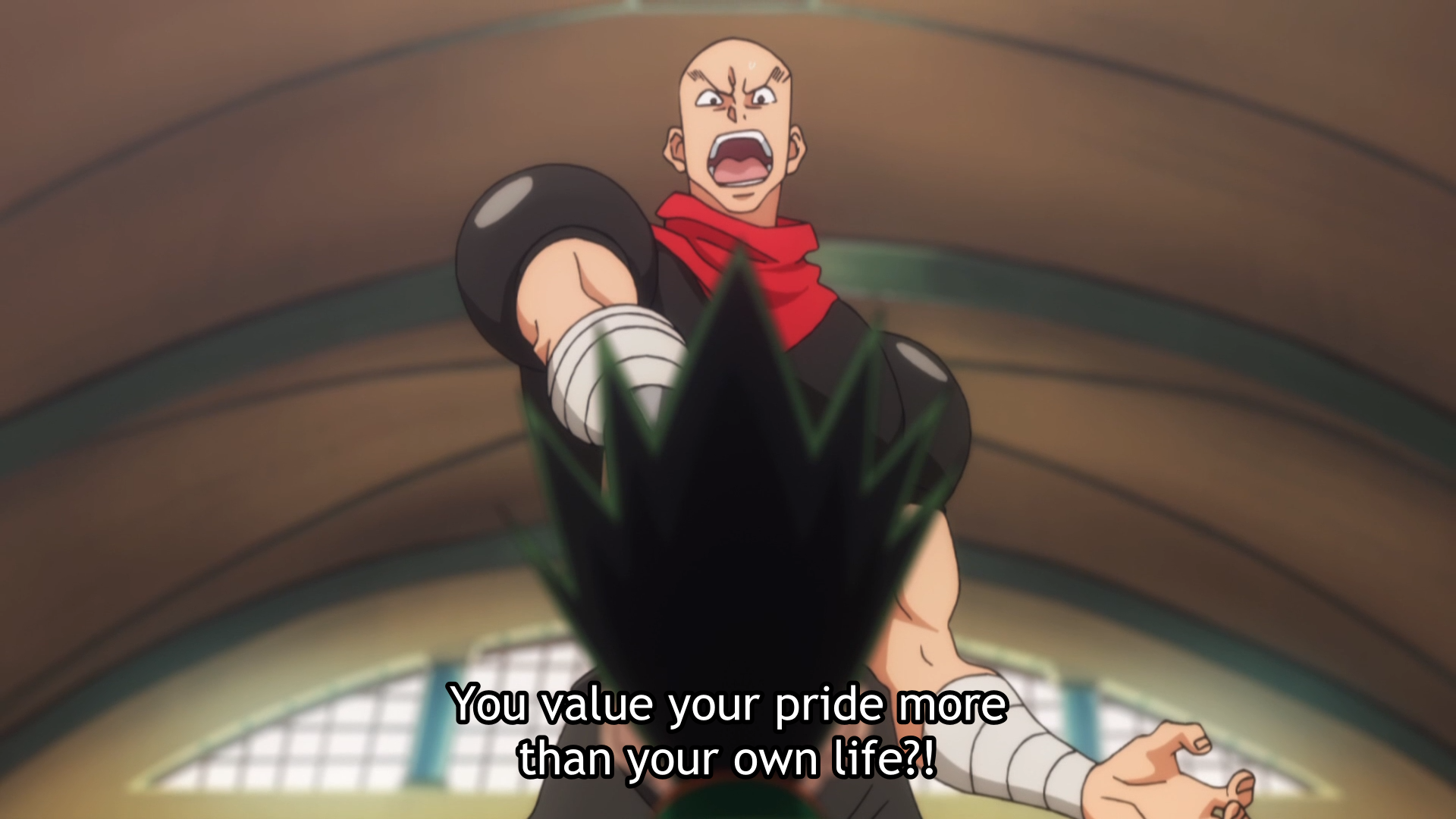 In fact, Gon is so ready to die that he frequently uses that very instinct as a weapon against his enemies. When faced with a much stronger foe, Gon will readily wager his own life, forcing his opponents into a strange game of violence chicken. When Netero challenges Gon and Killua to make him fight using both arms, Killua fails — but Gon succeeds, by throwing his body at Netero in such a way that the only two choices are “let me win or destroy my skull.” When Gon is matched up against a far stronger opponent during the Hunter Exam finals, he remains undeterred in the face of permanent body mutilation and eventually forces his opponent to stand down. Again and again, Gon asks his opponents, “will you surrender to me, or you will destroy me utterly?” Even those with no compunctions against murder, like Hisoka, hesitate in the face of that – if only to see how far his madness can grow.

In Greed Island, both the effectiveness and the danger of Gon’s philosophy are made abundantly clear. Gon’s training sessions with Killua and Bisky are dangerous yet efficient, as Gon demonstrates no hesitation in embracing training like “spar with this serial killer for a week.” Through Gon’s behavior, we see that his early friendship with Killua wasn’t a fluke, or just a result of their similar age; Gon has a madness inside him that told Killua they were alike, along with the light inside him that Killua finds inspiring. Killua’s brutal childhood made him strong, but also killed his inner child; that Gon possesses all that strength and rage, but also a light and gentle heart, raises serious questions about his ultimate nature. 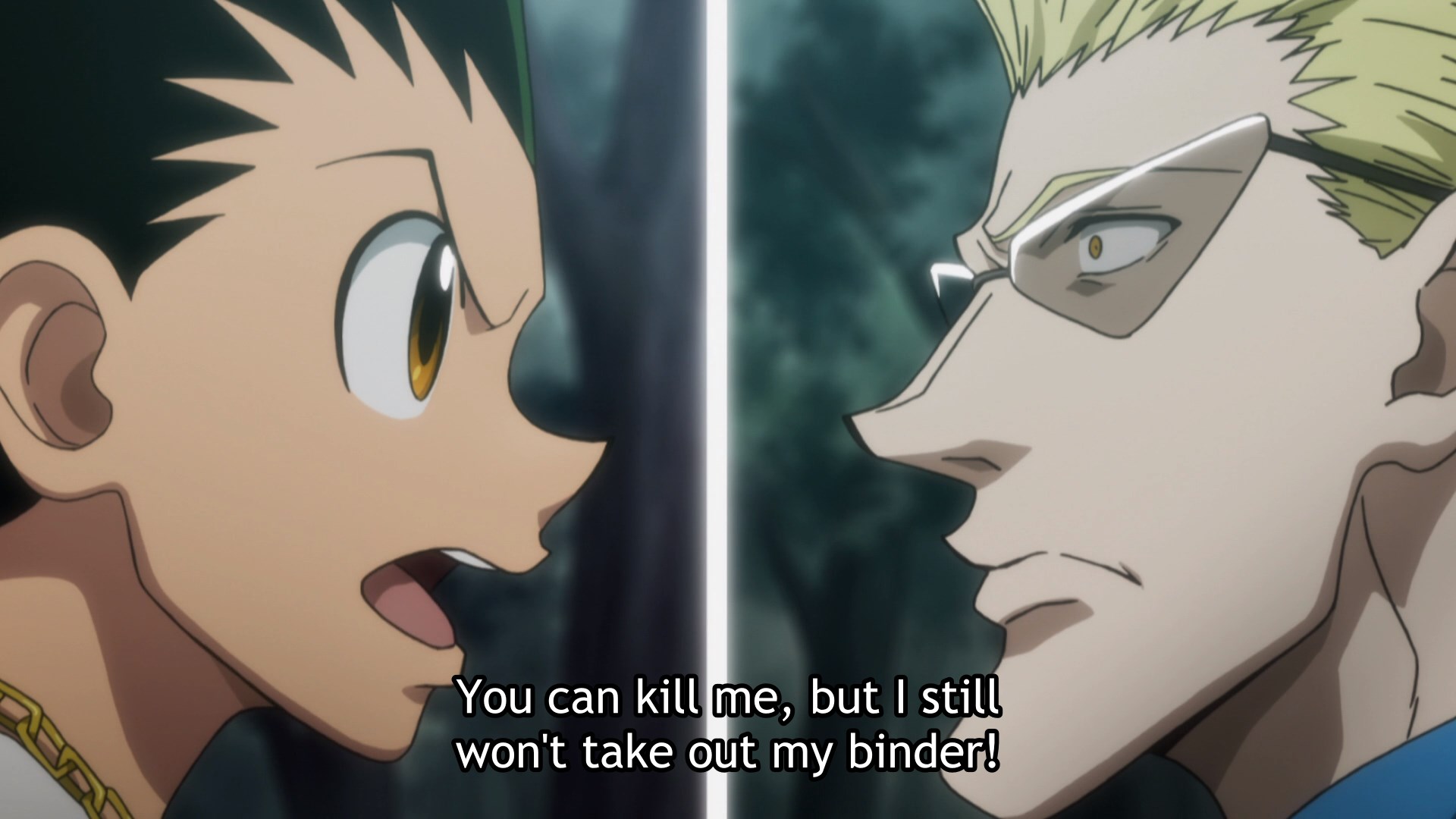 Gon’s self-destructive instincts at last take a toll in Greed Island’s climax. Though Gon has taken his life in his hands many times, he’s never suffered lasting consequences for it, and thus never learned to act otherwise. In Greed Island, his growing confidence and inner fire lead him to gamble his own body, treating his very limbs as “ammunition” to be expended, so long as the fight is won. His friends’ plan didn’t even involve such a sacrifice — but because Gon is Gon, he’s willing to lose a limb just to test whether he can beat some new enemy. Gon doesn’t flinch at violence or pain, even when it’s his own; these qualities make him a terrifying hunter, but also a wildly self-destructive one.

“Greed Island” is an appropriate name for a game specifically designed for hunters to fight, steal, and kill from each other. There is a hunger in hunters, something that sets them aside from the normal world. And while Hunter x Hunter celebrates that drive, it also emphasizes that people who embody it tend to be selfish, dangerous, or somewhere in between, and all blessed with a dash of madness. It’s no surprise that Ging abandoned his son, and no surprise Gon rushed off to chase him; for hunters, such dangerous, obsessive pursuits are the only ones worth attempting. 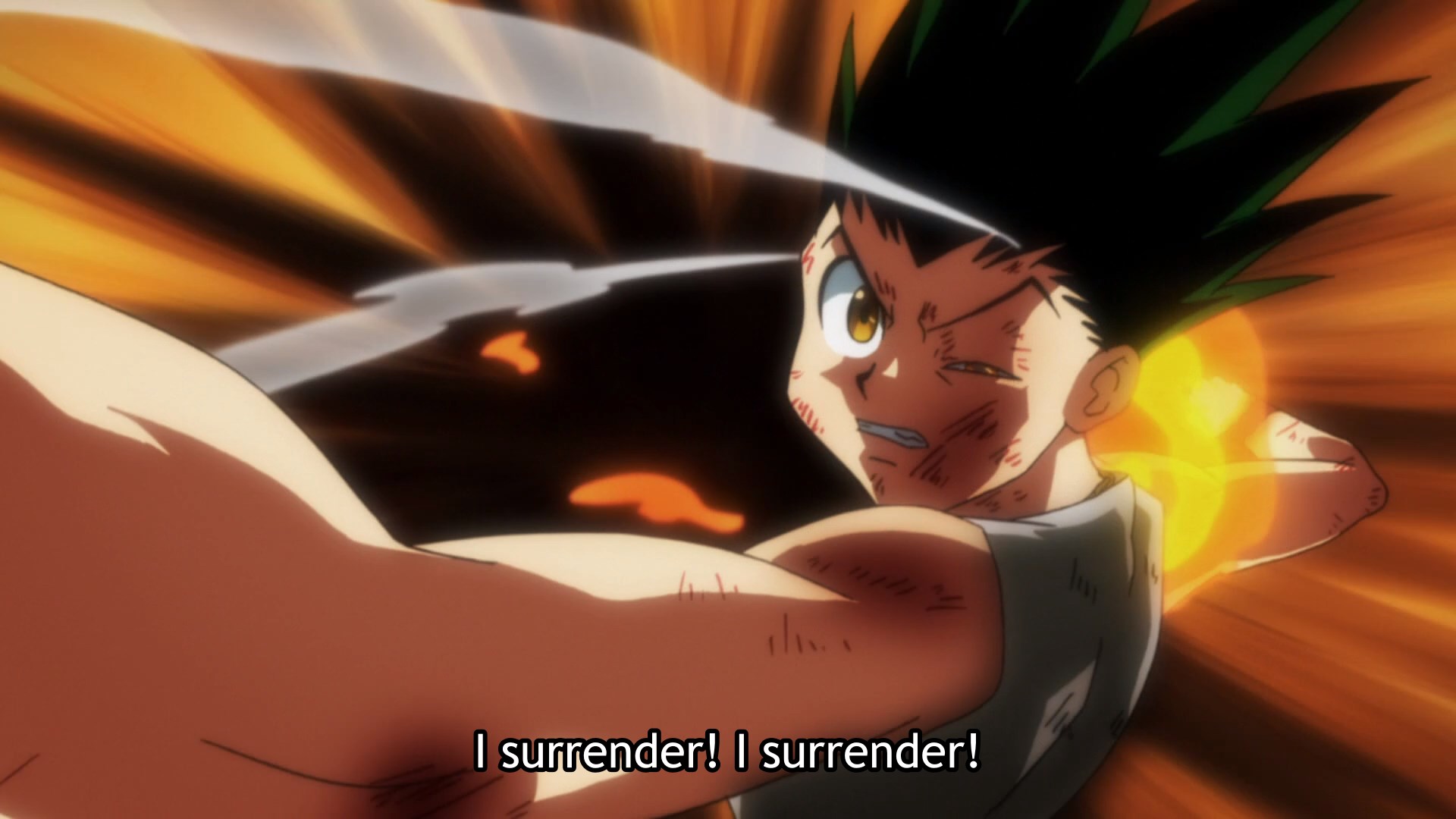 Gon’s monomania, his fanatical devotion to his friends, his willingness to make any sacrifice, and his slanted view of morality are all key elements of his personality, some of the core things that make Gon Gon. But just as these qualities make him strong, they can also betray him, or lead him to stray from his best possible self. In Chimera Ant, Gon’s weaknesses will consume him entirely, leading to one of the greatest reversals in anime history. In Greed Island, the fires that will rage through its follow-up are already set to smolder.

Who is your favorite anime protagonist? Let us know in the comments!