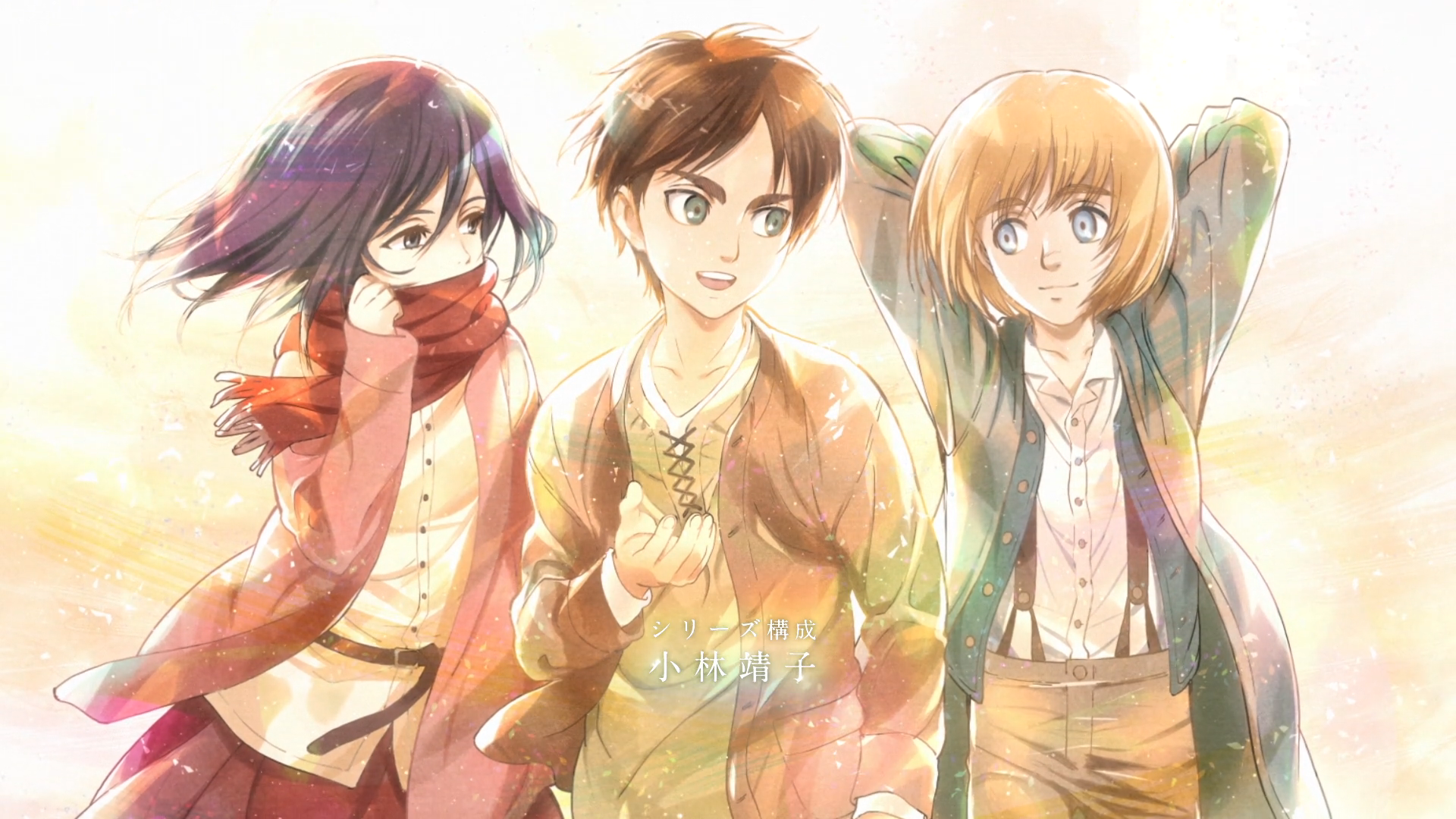 *Be sure to catch up on Attack on Titan before the Final Season starts December 7th! All episodes are streaming here.*

There are so many unforgettable and visually impressive moments in Attack on Titan. The sheer enormity of the Titans themselves, along with the always dazzling aerial acrobatics of the protagonists who battle for survival, are both portrayed in ways that create a uniquely immersive atmosphere. WIT STUDIO, Inc. did an incredible job making you really feel like you’re submerged in Attack on Titan‘s despair-ridden world, as if you too are rippling through the sky at breakneck speed, full of both courage and paralyzing fear at the sight of a seemingly unstoppable enemy.

This is especially apparent during key Titan transformations, the many battle sequences, moments that emphasize Hiroyuki Sawano’s breathtaking OST, and more. In anticipation of Attack on Titan Final Season, I came up with a short list of some of the best eye-popping, heart-racing moments from the first three seasons. Let’s dive in!

**Please don’t forget: there are MASSIVE spoilers up ahead!**

II. Annie transforms into a Titan within the walls, Season 1, Episode 24 – Mercy – Raid on Stohess District (2) 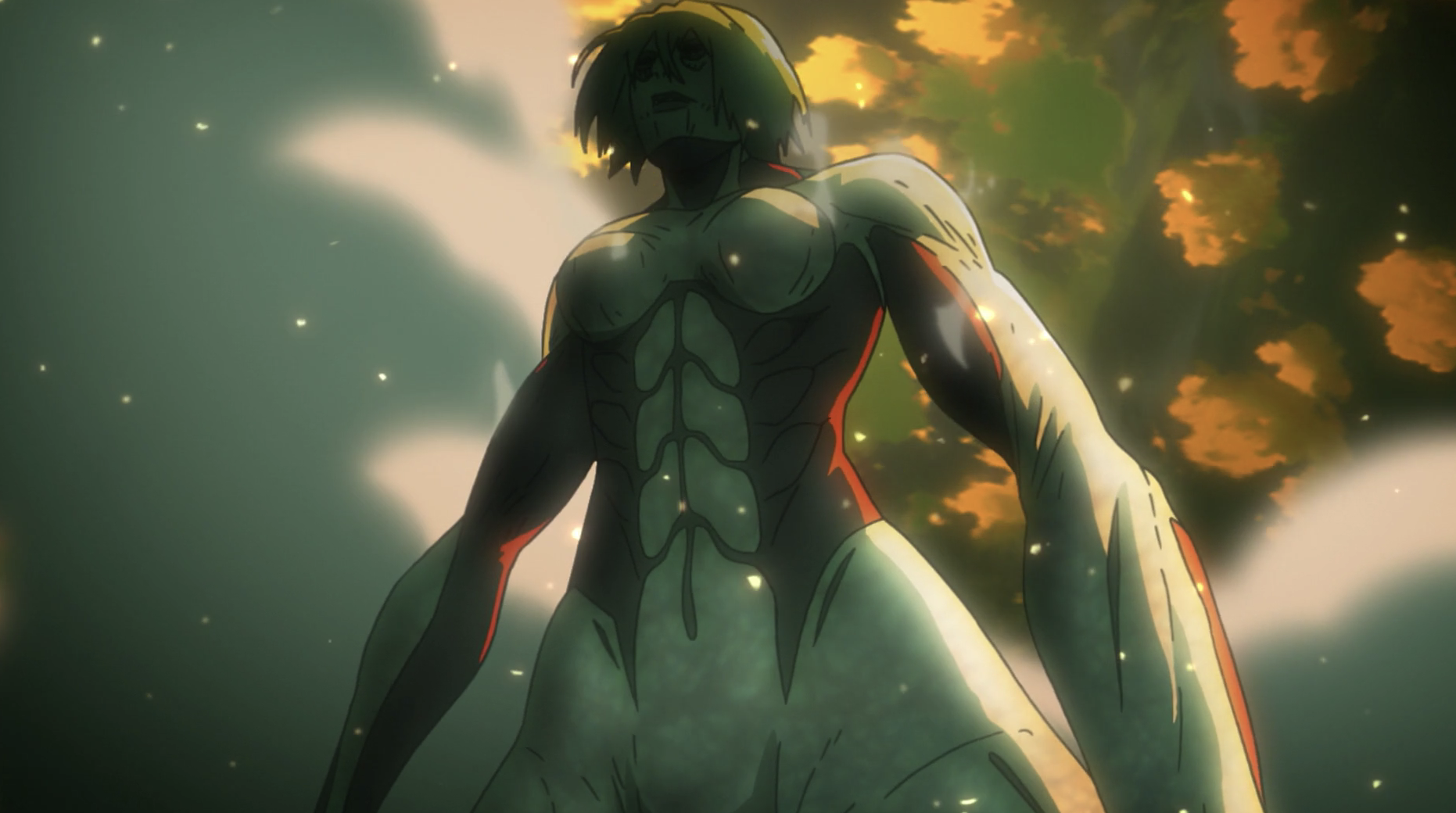 Up to this point, viewers only knew that the woman Titan was a traitor operating within the Walls. The end of the episode prior — Episode 23 — made the big reveal that Annie was the woman Titan all along. There’s a lot of twists and turns here, with Armin and co. luring Annie into a trap that ultimately fails. Annie’s Titan transformation leads to a pivotal fight that also coincides with the first season’s end. The emotional stakes feel significantly charged in this situation, since unlike any of the prior battles with Titans, here the protagonists are forced to duke it out with a friend.

My favorite transformation comes at the end of Season 2, Episode 31 “Warrior.” Eren discovers that two of his dearest comrades — Reiner and Bertholdt — are in fact the Armored and Colossal Titans, the very ones responsible for Wall Maria’s breach and the subsequent death of thousands (including Eren’s mother). It’s a pretty shocking moment that forces viewers to revise their entire perspective on two beloved characters, and the episode does a wonderful job expressing Eren’s emotional anguish through his facial gestures and an absolutely spine-chilling scream.

The emotional weight is visually matched by Eren’s mid-fall transformation, which is possibly the most elaborately animated character metamorphosis in the series thus far. It’s a gut-wrenching moment that deserves its rightful spot in the multitude of “TOP TEN ANIME BETRAYAL” lists (and memes) online.

Hiroyuki Sawano is a powerhouse of a composer. The man responsible for the stellar soundtracks in Kill La Kill and Promare is known for sonically accentuating already-thrilling battle sequences, with a technique now famously coined as the “Sawano Drop.” The Sawano Drop is a section in any Sawano track when the music briefly pauses only to come back in full epic force.

This moment in Attack on Titan Episode 4 is a prime example: the music cuts out at 0:21 — timed perfectly with the moment the Colossal Titan unexpectedly appears — and returns around 0:43, just as Eren fires off his OMD hooks and gets ready for battle. The sudden musical drop emphatically underscores the absolute shock of seeing the gigantic Titan literally pop up out of nowhere, and the musical return adds extra hype to a suddenly desperate situation. It’s a riveting sequence that comes after Eren muses somewhat hopefully about the prospects of beating the Titans alongside his freshly graduated comrades (poor Eren gets his hopes squashed rather quickly). Sawano’s expert timing and sound palette make this scene that much better. 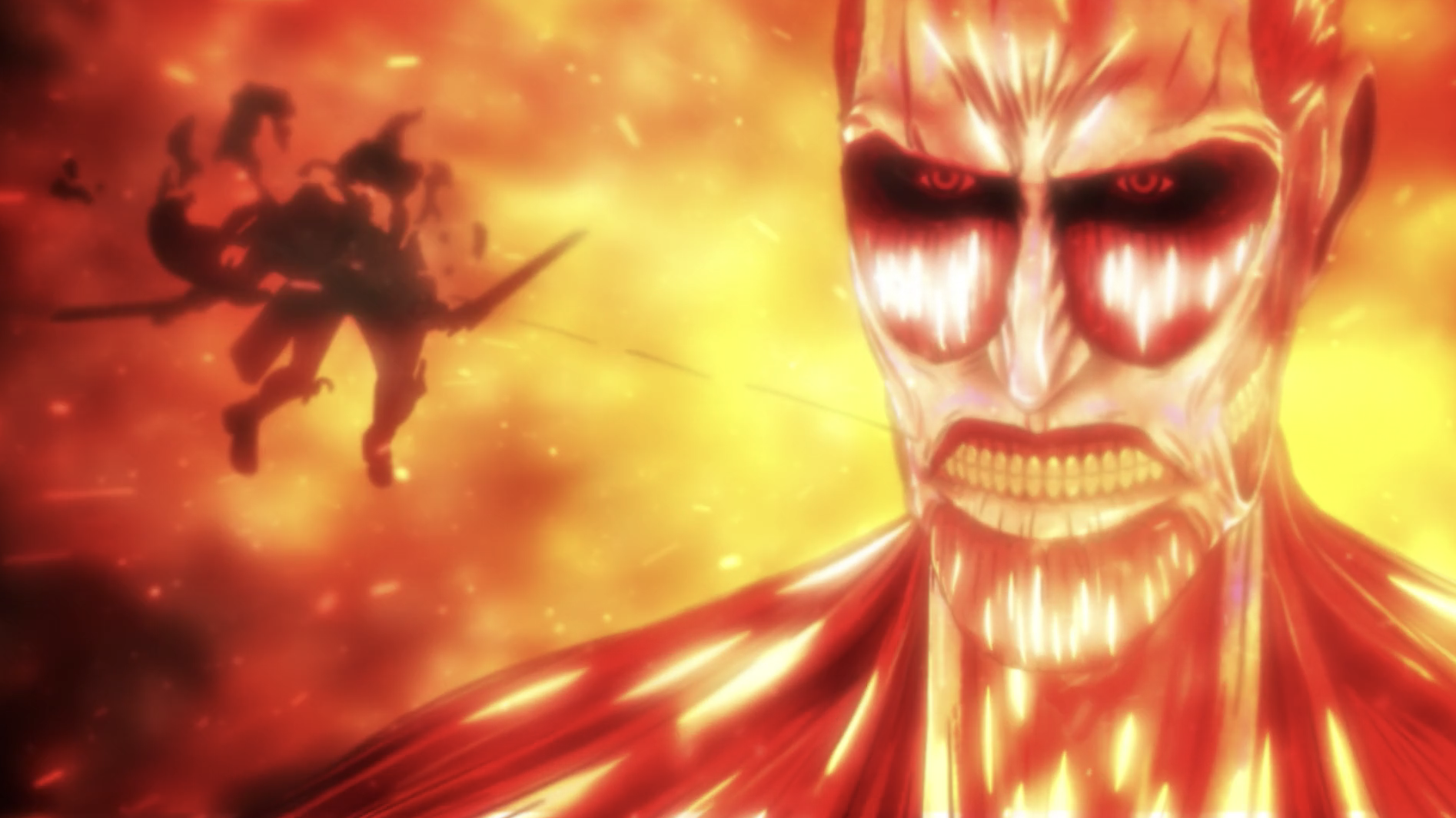 Of the three main protagonists in Attack on Titan, Armin is distinguished by his unwavering loyalty to friends and comrades, along with his tactical genius. Armin saves his friends and other Scout members on more than one occasion due to his intellectual prowess, and his willingness to stand brave — and remain kind — despite overwhelming fear makes him a truly admirable character. That’s what made this moment from Season 3 all the more horrifying to watch.

Near the end of Season 3, Armin surrenders his commanding position to Jean in a sudden moment of self-doubt and despair, but eventually comes up with a last-minute plan to beat the Colossal Titan. The only catch? It meant Armin had to be scorched to a crisp by the humongous Titan, all so Eren could trick and defeat an unsuspecting Bertholdt. We were forced to see one of the show’s most lovable characters literally get set aflame, made even more crushing by Eren’s recollection of young Armin’s bravery and innocent desire to witness the distant sea.

Miraculously, Armin survives this ordeal due to a last-minute change of heart in Levi, but it doesn’t make the experience any less impactful. Armin’s selfless gesture leads to the complete defeat of the Colossal Titan and marks a major narrative turning point: he gains Bertholdt’s power (after uh, eating him) and ostensibly becomes the new Colossal Titan. That makes this moment one of the most important sacrifices — albeit temporary — in a show riddled with, well, lots of sacrifices.

I know I’m not the only one that thinks Captain Levi is the absolute coolest. He quickly earned a top-tier spot for me in the pantheon of magnetic, effortlessly badass anime characters. Levi kept an even-temper during the most desperate situations, like when he managed to briefly fight Annie’s Titan form and survive, or during the victorious battle against Kenny and his minions. Even with those accomplishments, this has to be Levi’s crowning achievement: absolutely decimating the Beast Titan with his signature spinning attack.

Erwin and the last remaining Scouts sacrifice themselves in a suicide run toward the Beast Titan to give Levi the time to sneak up and kill the animal-like monster. The Beast Giant murderously, and gleefully, annihilates most of the Scouts by casually throwing loads of stones — baseball-style — at our heroes. That’s why there’s no greater satisfaction than to see Levi avenge his fallen comrades by ruthlessly hacking up the Beast Titan. Even though Zeke manages to survive and escape, I still think Levi laying the smackdown here is the most gratifying battle sequence yet in Attack on Titan.

Mikasa and Eren have so many great moments throughout Attack on Titan, but this one takes the cake for me. At the end of Season 2, Eren and the Scouts try to fight off both the Armored Titan and a slew of other Titans with almost no hope of success. Eren fails to transform into his Titan form and watches helplessly as the very smiling giant who killed his mother devours Hannes — a surrogate father figure who rescued young Eren and Mikasa years back.

In a last-ditch effort, MIkasa tenderly reminds Eren of their connection and the many times Eren supported her (like when Eren saved her life and gave her the iconic red scarf she always wears). Mikasa usually interacts with Eren as a protective guardian, so it’s especially beautiful and cathartic to see her express care for him with such warmth and vulnerability. And Eren returns the sentiment, which is also a deviation from the norm since he generally seems frustrated with Mikasa’s overprotective tendencies. “I’ll wrap that around you as many times as you want” is hands down one of the best lines from the series, and a fitting summation of Mikasa and Eren’s loving attachment.

Those are some of my favorite moments from the first three Attack on Titan seasons. What was left out? What would you have included? Let me know in the comments below!

Do you love anime? Do you love writing? If you have an idea for a features story, pitch it to Crunchyroll Features!