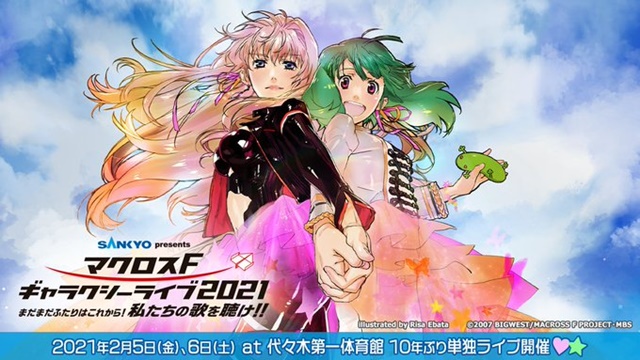 The official portal site for the Macross franchise announced on January 14 that “SANKYO presents Macross Frontier Galaxy Live 2021 ~Madamada Futari wa Korekara! Watashitachi no Uta wo Kike!” (The two are not over yet! Listen to our songs!) is decided to be postponed due to the declaration of the State of Emergency issued by the Japanese government on January 8, 2021.

The Macross Frontier series’ first solo concert in ten years, featuring its two main female singers – Megumi Nakajima as Ranka Lee and May’n as Sheryl Nome -, was set to be held at Yoyogi National Gymnasium’s First Gymnasium (capacity: 13,291) in Tokyo for two days on February 5 and 6, 2021. The live viewings that were planned to be held in theaters across Japan are all canceled.

“In response to the declaration of the state of emergency, the performers and staff had proceeded with the investigation of the possibility of holding the scheduled performance, but we have decided to postpone the performance with regret, judging that it would be difficult for everyone to enjoy it with security. We apologize to all those who have been looking forward to the first solo concert in 10 years, but we will continue to consider the possibility of holding it another day.”

“This time, the concert is postponed, but I would definitely like to deliver Sheryl and Ranka’s stage someday. I believe that the day will come when everyone will be able to enjoy the music of Macross F and our songs together again.”