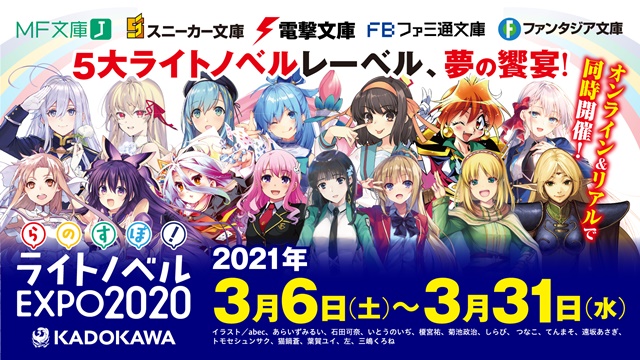 KADOKAWA announced today on December 10 that the world’s largest light novel event, “KADOKAWA Light Novel EXPO 2020” will be held simultaneously on the web and at a real venue from March 6 to March 31, 2021. The event was originally set to be held at Torokozawa Sakura Town in Saitama Prefecture on October 10 and 11, 2020, but has been postponed due to the COVID-19 pandemic.

The event will feature the popular series from the publisher’s five main light novel imprints – Kadokawa Sneaker Bunko, MF Bunko J, Dengeki Bunko, Famitsu Bunko, and Fujimi Fantasia Bunko. It is the first time that the five imprints have gathered for one event.

Its main venue is the event’s official website, which will offer Various exhibition projects that can also be enjoyed online. Meanwhile, its sub venue is Torokozawa Sakura Town. On March 6 and 7, special stage events for Sword Art Online (Dengeki Bunko), Date A Live (Fujimi Fantasia Bunko), and Re:Zero − Starting Life in Another World (MF Bunko J) will be held at the latter and will be streamed on Nico Nico, Periscope, and YouTube Live (audience will not be allowed to enter).

Also on the same two days, web autograph sessions by the creators from the five imprints are planned.

In addition, more than 2,000 autographed books by popular creators, with more than 100 titles in total, will be sold at the Da Vinci Store in Tokorozawa Sakura Town. Details of the book lineup and purchase methods will be announced on the official website shortly.