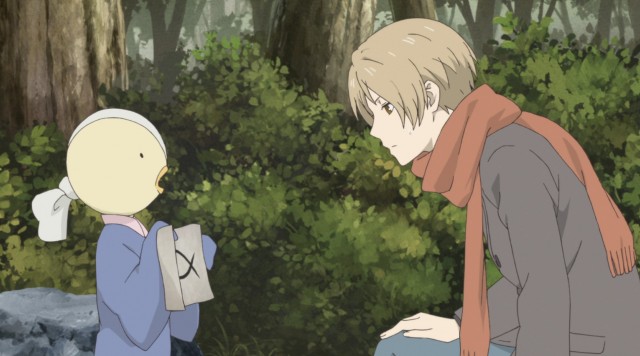 Two years and three months after the previous feature film Natsume Yujin-cho the Movie: Ephemeral Bond in September 2018, Natsume Yujin-cho: Ishi Okoshi to Ayashiki Raihousha (The Waking Rock and the Strange Visitor) was released in 65 theaters in Japan on January 16, 2021.

Despite its small number of theaters, the 51-minute film ranked seventh in its first weekend. Its opening weekend gross has not yet been reported. It also ranked second in Filmarks’ first-day satisfaction ranking with an approval rating of 3.81 based on 116 reviews.

The anime series inspired by Yuki Midorikawa’s supernatural mystery shoujo manga has had six TV anime series from 2008 to 2017, one OVA in 2014, and one feature film in 2018. This second film is based on the manga’s two popular yet-animated episodes – “Ishi Okoshi” and “Ayashiki Raihousha.” The first film’s Hideki Ito returned to the director’s chair, alongside the general director Takahiro Omori.

Last weekend’s No.1 film, Gintama THE FINAL dropped to second in its second weekend. The film earned 151 million yen (1.45 million USD) on 106,000 admissions on its second Saturday and Sunday, which was a huge 50 percent down from the previous week. Its cumulative box office revenue has reached 800 million yen (7.69 million USD) with 600,000 ticket sales.

The film regained the top spot in its 14th weekend was, of course, Demon Slayer: Kimetsu no Yaiba the Movie: Mugen Train, which earned 230 million yen (2.21 million USD) on 123,000 admissions. It has sold 26.44 million tickets and earned 36.17 billion yen (347 million USD) so far, and has continued to break the all-time records in Japan.

Seitokai Yakuindomo: The Movie 2, which had dominated Kogyo Tsushinsha’s mini-theater ranking for two consecutive weeks, finally dropped to fifth in its third weekend.