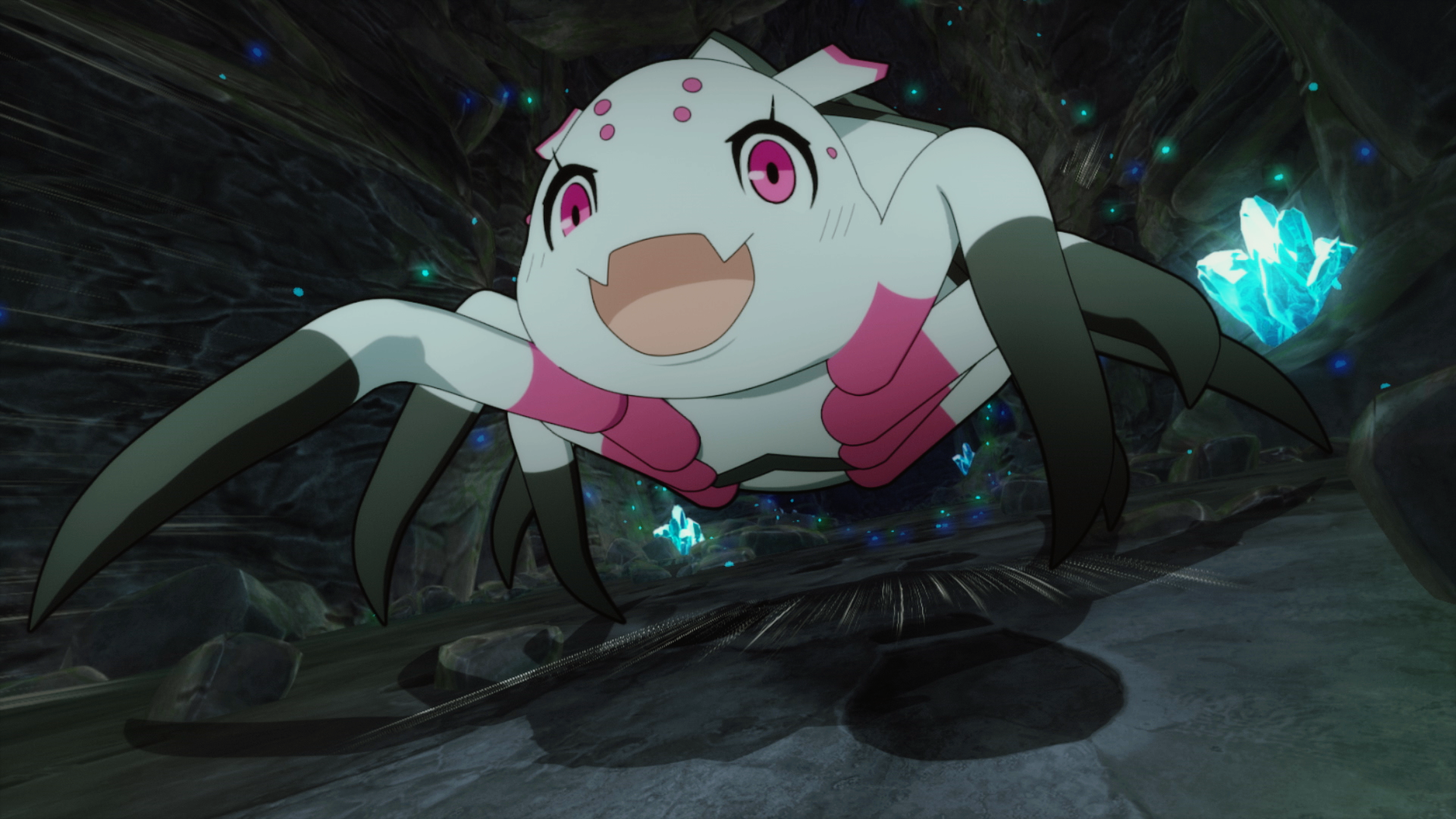 The upcoming Crunchyroll Originals series So I’m a Spider, So What? will be making its way to Crunchyroll in January 2021, and to celebrate the upcoming release, today we are publishing some exclusive interviews with the voice cast of the show! If you want to check out the original Japanese interview, you can do so right here.

In this interview, voice actor Aoi Yuuki (Madoka Kaname in Puella Magi Madoka Magica, Diane in The Seven Deadly Sins) talks about what it is like voicing a spider, all the internal monologues she voices in the series, singing the ending theme, and more!

Also be sure to check out the interview with voice actors Shun Horie (Shun) and Kaito Ishikawa (Hugo) right here!

“I” was reincarnated in another world… as a spider the weakest of all creatures. How will “I” survive in a dungeon filled with fierce, powerful monsters?!

The TV anime So I’m a Spider, So What? is set to begin airing in January 2021. We’ve interviewed the main cast for a special program to be aired right before the series premiere. For our first interview, Aoi Yuuki-san, the voice of “I (Kumoko),” will tell us about the highlights of the series as well as some behind-the-scenes stories!

I’m sure you never expected to be reincarnated as a spider.

Yuuki: That’s for sure! But another character I voiced not long ago, Gwen in Spider-Man: Into the Spider-Verse, was also a pink and white spider, so I guess I actually have a bit of a connection with spiders. I’m definitely not into bugs or anything, but since Kumoko and Gwen had such cute designs, I’ve slowly grown to like spiders a little more.

Do you remember your first impression of the novel series?

Yuuki: Mainly that it had a lot of words (lol). I first came into contact with it in the form of the manuscript I used to audition, and I remember being surprised by how great each sentence was. Another interesting thing was that it had a much harsher setting than most stories about being reincarnated in another world. Usually, the protagonist starts out at a high level and immediately gains really strong powers, but this one reincarnates as the weakest of all monsters, in a really tough environment and with very little room to develop her abilities, so that made it seem new and unique.

Kumoko does seem to just barely squeak through all her battles.

Yuuki: That’s the interesting thing about a story that’s specifically about how she survives as a spider. In many isekai stories, the protagonist’s knowledge from their former life aids them in their new world, but in So I’m a Spider, So What?, she has to both learn and mature as a spider. 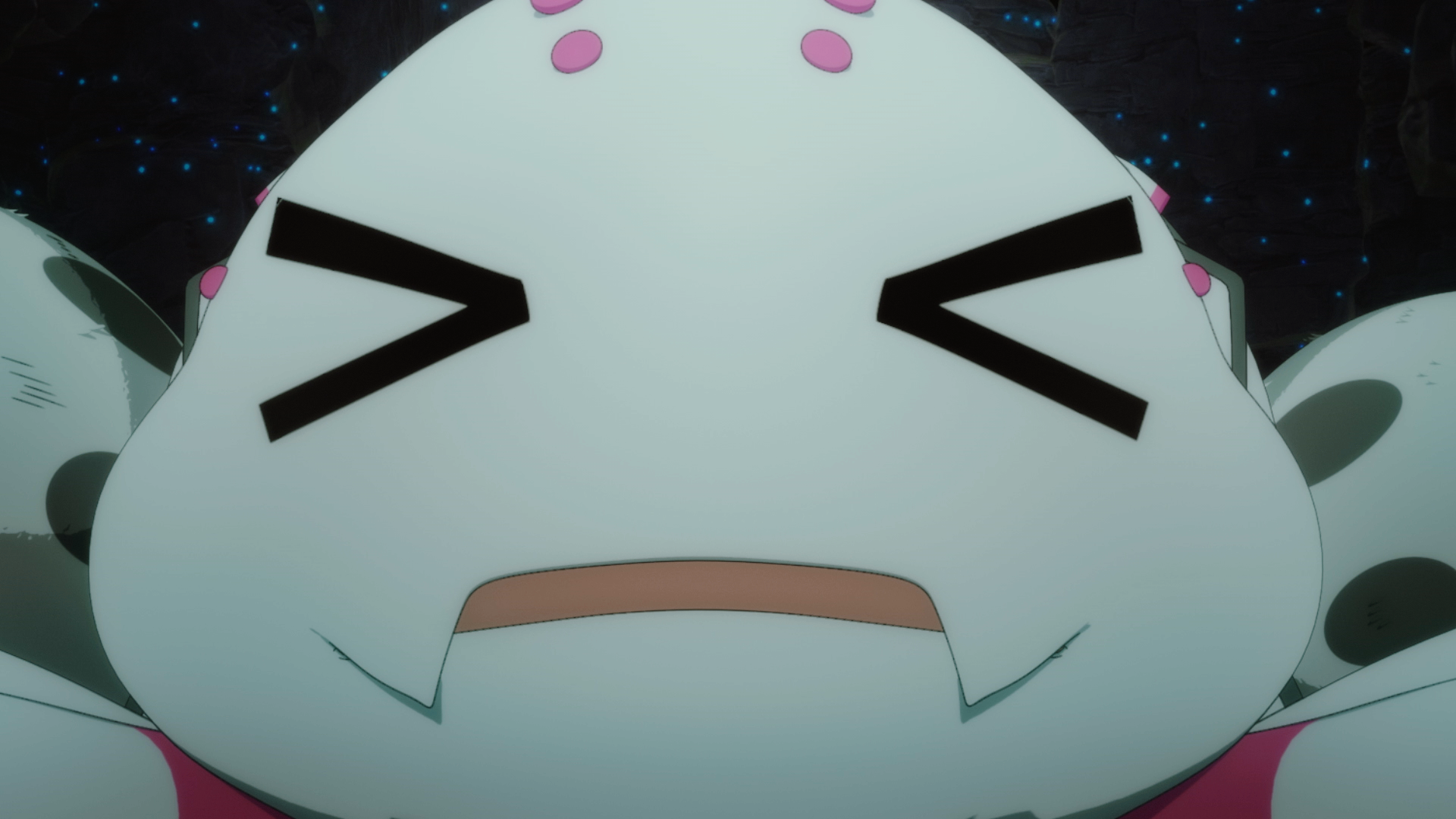 Was it easy for you to grasp what kind of character Kumoko is?

Yuuki: Yes, I could tell right away that she was a very positive girl who recovered quickly from setbacks, and when we started recording, the director said we’d be fine as long as I had those two qualities pinned down, so it was easy to grasp what her personality was like.

So you would sum it up by saying she’s very positive?

Yuuki: This sort of connects to that, but she really likes to eat, and one of her fondest hopes is to eat lots of good food. When someone is surrounded by enemies and doesn’t even know where they are, I think they’d want to give up. But not only does Kumoko fight and never give up, she also finds the hope to stay alive. I think that’s really amazing.

Looking at the original novels, she seems to eat a lot of very strange things.

Yuuki: Thanks to that, I now know some new ways to spit up food (lol). There aren’t a lot of titles that include so many ad libbed spitting-up scenes, so I’ve been trying some different variations. But as the story progresses, she starts to find some monsters that taste good. Before I knew it, I started to think they looked delicious too, even though I’m playing a monster myself, so my mental strength has been improving along with Kumoko’s. 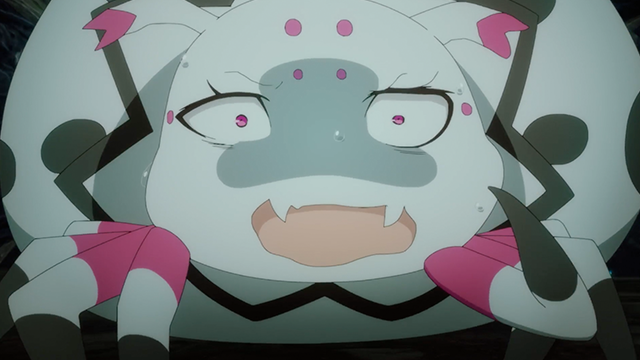 Kumoko is just a small spider in the story, and seeing how she fights monsters that are much bigger than her, some in large groups, is one of the highlights.

Yuuki: I guess she must be really smart. There’s something philosophical about how she develops a spider’s quick wit, and it helps her persevere in battle. I think it’s really cool how she thinks quickly while also moving quickly.

Something tells me she’ll have a lot of internal monologues, too…

Yuuki: The sheer number of words in this story makes it a challenge!

So your initial concern carried over into the recording?

Yuuki: It’s physically difficult to fit so many words into such a limited span of time. I thought I was actually pretty good at speaking quickly and working various kinds of expressions into a single sentence, but a lot of moments in this title shook my confidence a bit… That just makes it even more fun when everything fits just right, though. I often compare voice recording to rhythm games, so when particularly difficult recording sessions go well, it feels like I just landed a great combo and hear a long string of “Perfect! Perfect! Perfect!” And if a “Great” or Good” makes it way into that, I get annoyed and want to do it over (lol). So I feel a particularly strong sense of accomplishment after a successful recording session for So I’m a Spider, So What?

It sounds like the recording has been pretty harsh.

Yuuki: It might be because I get too eager, but there have been moments when I had to ask for a break due to low oxygen levels. It’s rare that I get so out of breath during a recording, but that has happened at least once per session with So I’m a Spider, So What? It’s rough, but I know it’ll pay off in the end. 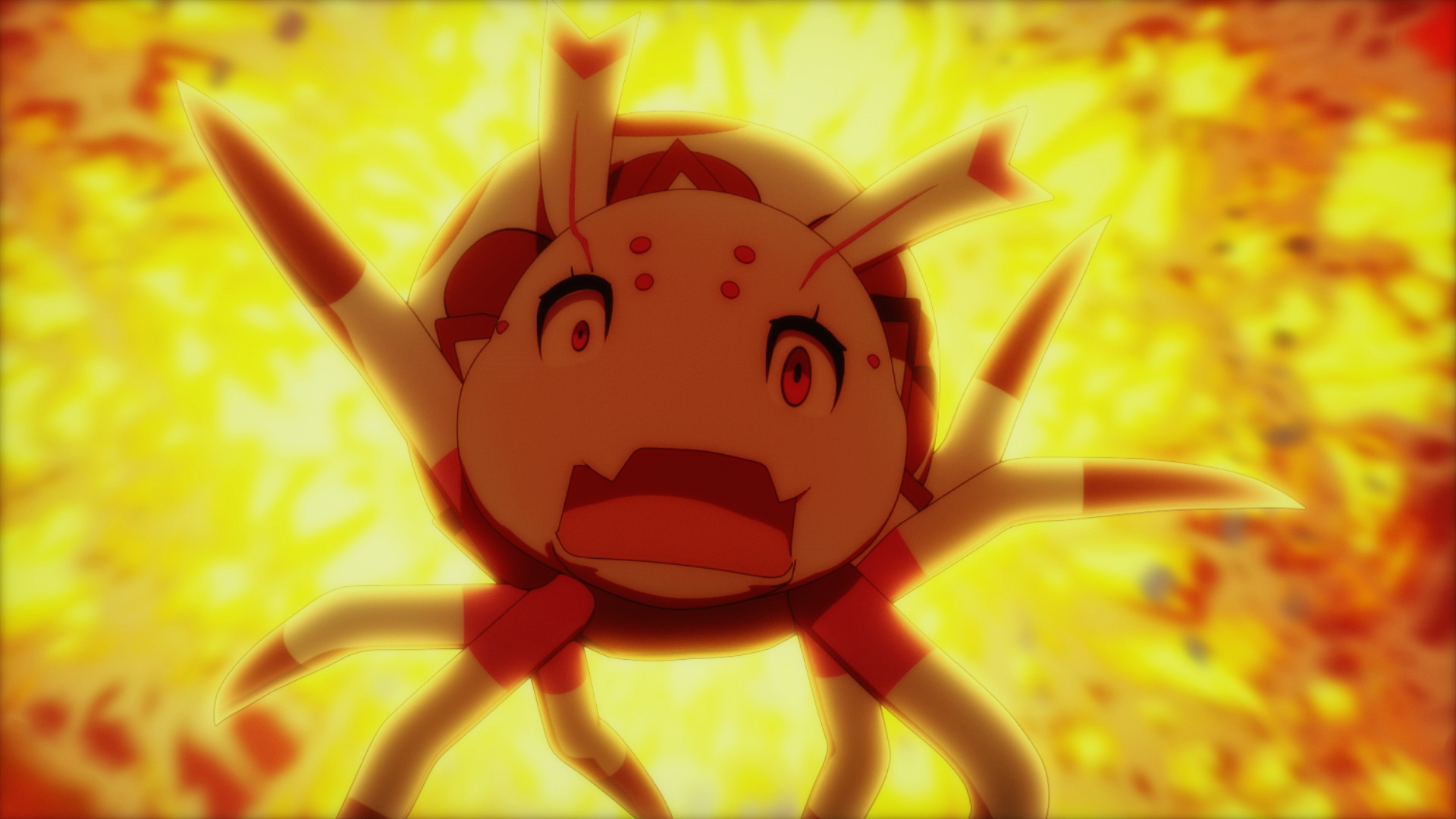 How do you prepare for the role?

Yuuki: Everything she thinks and feels is expressed in her lines, so even without trying too hard to understand or add flavor to them, I can clearly tell what kind of character she is and what she’s thinking. I owe that to the original novels and the scripts. Kumoko is very good at explaining things about herself, meaning all I need to help me understand her more is the script, so it hasn’t really been necessary to give too much thought to preparing for the role.

Did the director or sound director give you any particular instructions?

Yuuki: The one that left an impression on me was that they wanted the battle scenes to look really cool. I was asked to include comical battle cries as well as calmer, more serious reaction sounds. In particular, when she’s concocting a strategy or engaged in a do-or-die battle, even I’m surprised by how cool she is. That said, about 80% of it is silly gag humor!

It sounds like the recording sessions are going smoothly.

Yuuki: Yes. I’ve come to understand what kinds of reactions the director wants and the right timing for them, and it feels like we’re on the same wavelength now. Since it’s a comedy series, it’s important to know how its ups and downs should flow as well as where and how to insert punch lines, and sharing ideas until everything fits together perfectly is important since everyone interprets things differently. But we’re in a place now where I can offer suggestions as to what the director might want from me, so it’s fun thinking about what I’ll do in the next session.

Incidentally, the original novels follow the hero’s side of the story concurrently with Kumuko’s. How have you viewed that?

Yuuki: To be honest, I haven’t touched on any of the hero’s side of the story at all. Of course, I’ve read the scripts, so I know what happens, but they’re handled separately in the story, and given the current state of the world, all of us voice actors have been recording separately. I currently have no idea what kind of acting the others are doing right now, so I’m also looking forward to how their two stories will eventually connect. 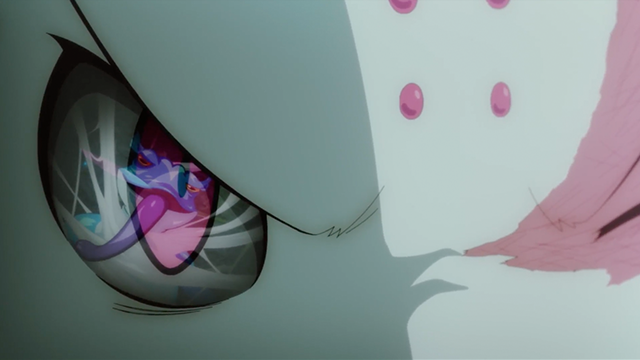 You also sang the ending theme, “Theme of Kumoko-san,” from Kumoko’s perspective. What kind of song is it?

Yuuki: At 400 BPM, it’s a super high-tempo song! And the lyrics are fitting for a 400-BPM song, so I hope everyone will listen to the effort that went into them. Even I was shocked by how far a person can stretch their own limits. And the lyrics are representative of the story, so I think people will be able to imagine the various expressions of Kumoko when they hear it.

Yuuki: It has a level of excitement that I had never seen or heard before. But learning that I could actually sing such a difficult song gave me a lot of confidence. Of course, I got through it with help from lots of people, though. In that sense, both the anime and the ending theme made me feel like I was seeing things I’d never seen before.

Finally, please share a message for the fans looking forward to seeing the anime.

Yuuki: It’s a pretty dark, harsh story about how Kumoko struggles to survive in a world filled with monsters, but at the same time, it shows off Kumoko’s sillier side with gag humor, making it a very unique series. It somehow comes across as comical even though the main character is completely serious, so I hope everyone can relax and enjoy it for the fun series it is. It also offers different tastes by following both Kumoko’s story and the hero’s story, so I think people who like to speculate will also find it satisfying. Also, I hope everyone will remember that acting out Kumoko consumed tremendous amounts of oxygen (lol).