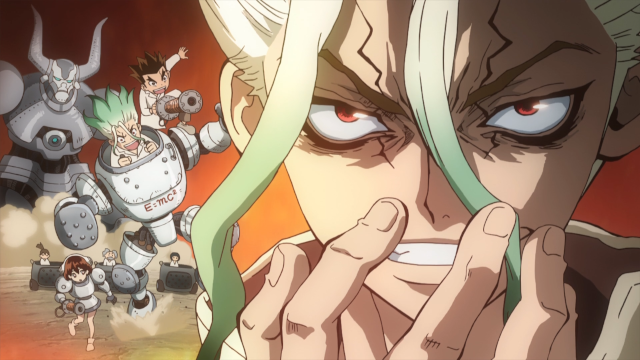 This is an article written by guest author Valentina Ferro, an experimental physicist, author, and illustrator.

Famous inventor Leonardo da Vinci once said, “the noblest pleasure is the joy of understanding.” This is a quote I live by. You see, I am a scientist — an experimental physicist, to be precise. It makes perfect sense for me to cite this quote and to talk about science, and knowledge, and understanding.

The point is, though, that I cited da Vinci because of the “joy” part. You could replace da Vinci’s quote with the phrase, “that’s exhilarating!” and it would not lose its meaning. Without that joyful inner motivation, I doubt we would have any science at all. No airplanes, no cotton candy machines, not even the screen you are reading this article from. I could talk about that joy, or I could convince you to experience it. For example, by watching the anime Dr. STONE.

Dr. STONE is the story of Senku, a young, talented high school student who wants to travel to space. However, an inexplicable calamity occurs and everyone on the planet is transmuted to stone. Senku wakes up thousands of years later. The passage of time has reverted Earth to a new stone age — he would need to kick-start technology from scratch to build society from the ground up and fulfill his dream of a space adventure.

This means doing science. From reinventing simple tools, like pottery and pulleys, to making glasses, electricity, and radios. All while shouting, “that’s exhilarating!” time and time again. I loved the show because of the quirky and fun experiments, but there is more to it than that. The anime describes science for what it really is: a difficult, collective endeavor, made up of countless failures, yet it’s one of the funniest and most joyful things we could do.

Don’t take my word for it, let’s have a look at what Dr. STONE offers for scientists, science-lovers and, to be honest, any curious viewers that enjoy fun. 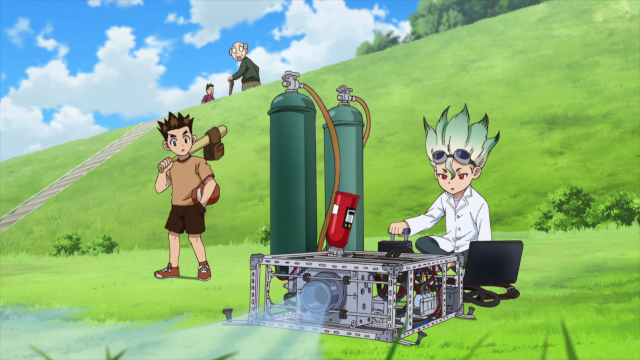 The Science is Really Good

If you have ever followed a comedy show like The Big Bang Theory, you would agree on one thing: physicists can be a pain in the neck. We spend hours debating how accurate a scientific fact is in our favorite sci-fi franchises. For Dr. STONE to even stand a chance, it needed to be accurate.

Maybe the creators of the series were afraid of annoying physicists like me, or they just enjoyed finding all the right details — regardless, they pulled it off right from the beginning of the show. The first use of science in the anime is when Senku uses a mixture of nitric acid and alcohol to reverse the petrification process on his friends. While I cannot speak for the fictional de-petrification process, nitric acid and alcohol are, indeed, used in science to etch materials layer by layer at the molecular level.

And Dr. STONE does not stop at telling you the chemical process, but it shows you where Senku gathered the ingredients. He obtained nitric acid from nitrate-rich bat guano. He purified alcohol through a distillation process, making brandy from wine and condensing the evaporating fluids of the brandy to make (almost) pure alcohol.

Just to explore this one scene — we get a glimpse of the chemistry needed to make compounds that corrode other materials. We peek at a little bit of biology as we learn that bat guano degenerates into nitric acid only when the right microorganisms live in the environment. We get a taste of thermodynamics as that’s why alcohol evaporates and condenses, and the rest of the brandy does not. And this is only the beginning of the show! 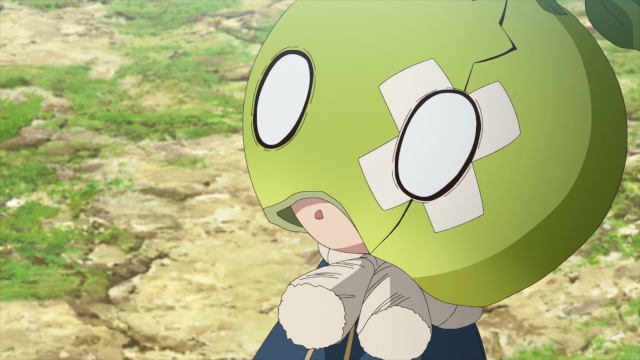 My favorite example comes later, and the science is much simpler: the pinhole effect. One of the characters, a little girl called Suika, walks around wearing a melon rind as a mask, with two holes where the eyes should be. Not only does this make for an adorable chibi design, but it gives the opportunity to explain that Suika is wearing the melon mask because of her poor eyesight. Poor eyesight often means that when the light reaches the eye, the crystalline (the bulging clear part in front of the iris) is not able to focus it down at the right distance to form an image at the retina in the back of the eye. The light is focused just before or just after it.

Senku explains that the small holes or apertures in the mask “force” the light to travel at a straighter angle, and thus the crystalline can now form an image that stays in focus for a longer depth, able to be intercepted at the retina. That’s how Suika can see.

One of the reasons I love this example is that you can try it yourself. If you have some eyesight issue, try making a small hole in a piece of cardboard and stare at something you cannot see well without glasses: through the pinhole, it should look much clearer. It is the same trick that is used in cameras when you want to have both the foreground and the background in focus. You might have experienced it countless times without knowing it.

I was surprised that, while watching an anime, I got to enjoy some great examples of science and even got prompted to do some DIY experimentation. And, even if I am a PhD-decorated scientist, I got to learn something new surprisingly often. 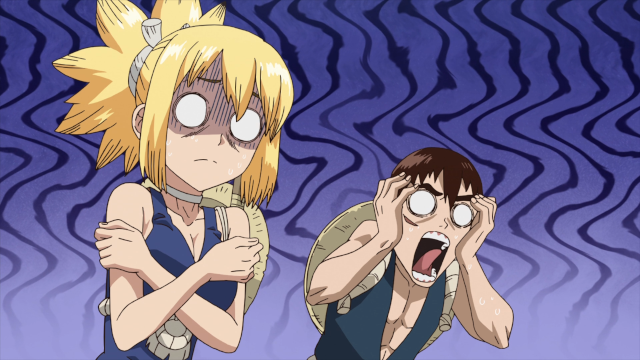 The Science is Hard Work

For the science to be accurate, it also means that Senku fails often. Science is hard. Science is trying one thing over and over again. Scientists do not know all the answers when they study something, and that’s the whole point of it. We get into the field with an idea, we fail, and then we adjust our aim. And the process repeats.

The creators of Dr. STONE did not take any shortcuts. It would have been easier to have a super-humanly skilled high school kid never fail an experiment so they could get on with the plot, but they loved science enough to give failures the credit they deserve.

When making the nitric acid/alcohol compound, he needed an exact proportion of the two. A bit more of one thing, and the mixture is ineffective at chipping away stone. A bit more of the other way, and it will explode in your face. Before trying it on his friends, Senku spends months trying to perfect the mixture. In a beautiful shot, we see the many tens of petrified birds that he experimented on and who did not wake up. Months and months of failures.

It’s not that there are things that science can’t explain. You look for the rules behind those things. Science is just a name for the steady, pain-in-the-ass effort that goes behind it.

Science is frustrating at times. You need a lot of determination to get you through it. But when you stop and think about it, failures themselves are what makes everything interesting. It means that there is more to understand, and more to discover, and more to play with before getting to the truth. 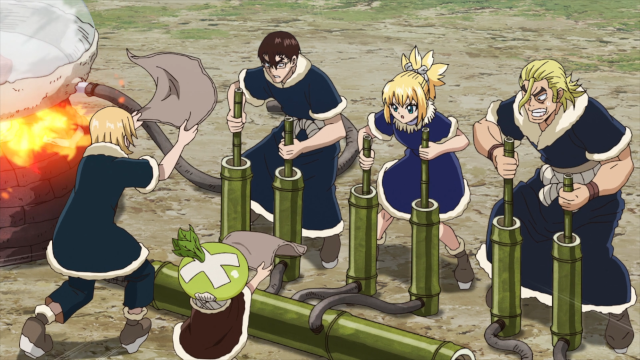 The Science is a Collective Endeavor

Did you ever stop to think of how much humanity needed to achieve for just the simplest things in life?

Take a warm cup of coffee. You would need boiling water, coffee beans, and a grinder as the bare minimum. Beans are available all around the world now, but this is only after European explorers first traveled to the Americas. To navigate the ocean, they needed strong and reliable galleons. They employed the same principle Archimedes discovered in ancient Greece and decided to make a vessel out of wood. They needed to cut the wood into slabs, which means having access to metals to make blades. And making such blades would require melting the metals, which requires a furnace that can reach a higher temperature than that of a typical campfire. The furnaces would need to sustain higher temperatures without cracking, for which they would need pottery … and so on. I have not even mentioned what would be necessary for the navigation, like sextants, compasses, maps, paper, ink. This is just for the beans!

We often underestimate how much of our everyday life relies on the millions of small contributions many before us have made. Science and technology are the collective endeavors of humanity. Senku knows this well. Living in a new stone age, he has to fast-forward through many of these steps in order to get something that seems quite trivial.

In the field, we like to think about how much science is incremental, and that we stand on the shoulders of giants. But I had never stopped to think about what this really meant. Not until I cheered for Senku trying to make a radio, jumping from inventions that are centuries apart to make the device in the smallest number of steps. And believe it or not, one of the steps is making a cotton candy machine!

This is my favorite aspect of the anime: getting to enjoy what we, as a species, have done and the pride that comes from being a part of the process. Appreciate the avalanche of effects that an “insignificant” discovery can have.

Head of the village: What you are making is totally unrelated, and yet the village becomes more and more enriched.

Not to mention that this collectiveness goes beyond the history of progress. Senku is a genius. But, like any genius, without the support and help of his friends, he could not get very far. 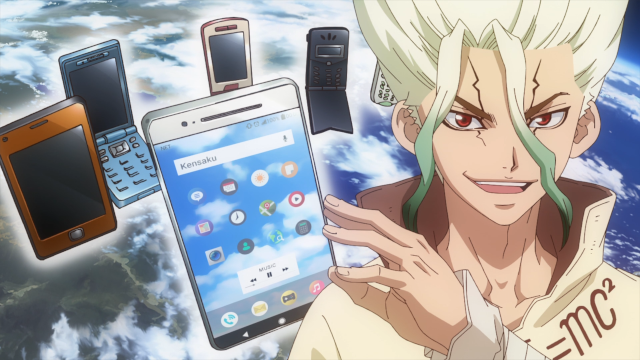 The Science is Fun

I am biased, I know. But science IS fun. It is fun to break (or blow) things apart. And it is fun to put them back together. And so are the “ah-ah!” moments that come along the way as you start to understand things.

Senku and his crew live in a challenging time. They fail over and over, they struggle to get things that are easily accessible to us because of centuries of progress. Yet they laugh, they play, and they make goofy faces. The show is colorful and light-hearted.

This is because the challenge and the failures pale compared to the thrill of discovery, the awe of understanding, and the pure fun of putting to practice something that is in our mind. An idea, first made of thin air, suddenly becomes real.

Yes, indeed. And if I have failed to convince you that science is fun and that the Dr. STONE anime is worth watching for that very reason, I invite you to a final challenge: go do your own experiment, collect your data, and make your own theory.

Or in other words, watch Dr. STONE and find out for yourself why the show can be an exciting adventure. Do it … for science!

Valentina Ferro is an experimental physicist, writer, and illustrator. You can visit her website, Inking Science, here.