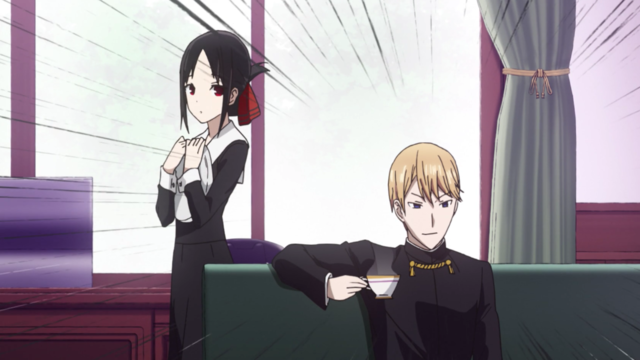 Part of what defines a good romance is the build-up to the big confession and the character’s journeys to get there. Along that journey, you may find yourself stressing over all those near kiss moments and love triangles. Maybe you find yourself coming to appreciate the couple’s support for each other, their playful banter, and even their opposite personalities. All of this is great, but you know what no one really talks about? The meet-cute! You know, the moment two characters meet for the first time, sparking the development of their epic love story. It’s one of the most important aspects of the relationship, because, without it, there wouldn’t be a couple to ship or a romance to pursue!

Whether they were short and sweet, or dramatic and electric, the meet-cute is the significant moment where we are introduced to our leading love interests and shows us what we can look forward to. Here are some of the best meet-cutes in romance anime!

Your Name is a remarkable film for many reasons. One of them being how its protagonists Mitsuha and Taki’s paths continuously cross in various ways, resulting in the ultimate meet-cute!

The first time Mitsuha and Taki “meet,” it’s not exactly face-to-face. The two come to learn about each other when, for reasons unknown to them at the time, they were switching bodies. The two have no way to communicate with each other other than to leave reports on their phones about the day’s events so the other isn’t completely oblivious to what happened. Because there’s not much Mitsuha or Taki can do about the switching, the two decide to do their best navigating the situation and this whole encounter becomes very entertaining to watch. 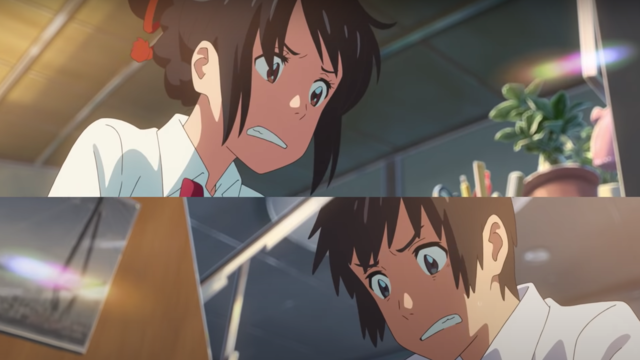 Wanting answers to this strange phenomenon, Mitsuha and Taki’s search leads them to an unexpected run-in and our second meet-cute. This meet-cute is equal parts romantic with Mitsuha and Taki breaking the boundaries of time to see one another and gut-wrenching as we’ve learned the truth behind Mitsuha’s fate. Because of all the switching, Mitsuha and Taki became well acquainted with each other, and that’s apparent in the teaseful banter between the two as they take in the fact they finally found each other. With its accompanying music and animation, this scene is beautiful and all the missed opportunities throughout the film don’t even matter anymore. 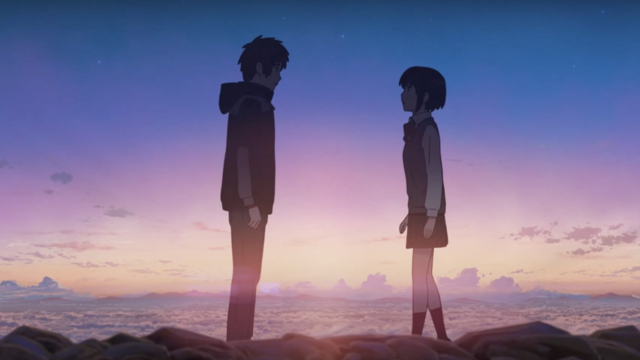 After the events of the climax of the movie, it seems that Mitsuha and Taki’s memories have faded, and they’re living their lives normally. As adults, Mitsuha and Taki spot each other on a train one day and despite not remembering the journey they shared, it’s clear to each other that all this time they knew they were searching for someone. Motivated by that feeling, Mitsuha and Taki immediately look for each other, and in that one final moment by the stairs, that last meet cute, they’ll finally remember their names. 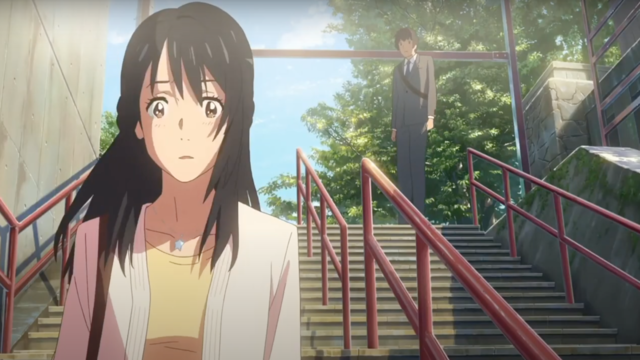 I could write novels about how amazingly adorable Love Chunibyo & Other Delusions is as a series, and the relationship between Rika and Yuta is just too cute for words … but here I go!

Yuta is hungry for a fresh start at a new school where no one knows about his past and his embarrassing chunibyo (a term in the Japanese language used to describe a person who manifests delusional behavior, particularly thinking that one has special powers that no other person has) ways, but then he has a chance encounter with his upstairs neighbor, a girl with a wicked eye. Yuta is moving some boxes onto his balcony when he sees a girl scaling down the side of the building. She’s having some trouble finding her footing, so Yuta helps to catch her feet. The foot catching actually becomes a really cute aspect of their relationship later on in the series.

Rika and Yuta’s very first encounter is short and sweet, but then comes the first day of school and their official introduction becomes comically chaotic. At first, Yuta is impressed seeing Rika “open” the automatic train doors with one swish of her hand, but that intriguing first impression turns to fear and some playful taunting when Rika expresses to Yuta she knows about his past chunibyo delusions. From here on out, Rika and Yuta often find themselves together, growing closer as the series goes on, partly because they’re neighbors and classmates, but also because whether Yuta wants to admit it or not, once a chunibyo, always a chunibyo! 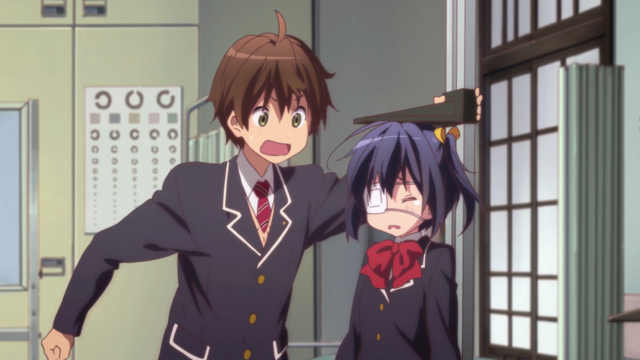 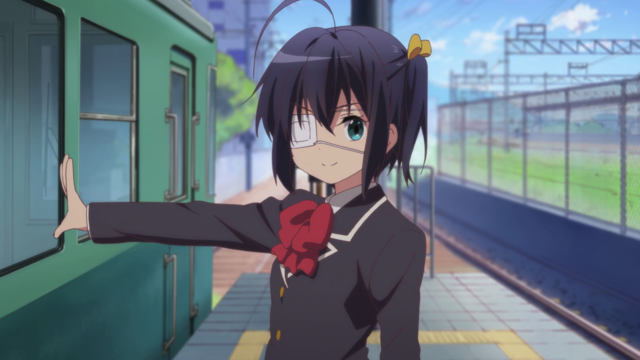 Your Lie in April is an emotional series, but it does a great job of blending its sincerity with comedy, and that’s abundantly clear when Kaori and Kousei meet for the first time.

Kousei agrees to accompany his friend Tsubaki who is setting up their mutual friend Watori with a classmate, Kaori Miyazono. When Kousei arrives early at the meet-up spot, he meets Kaori who’s putting on a performance. Although he attempts to take a picture capturing the musical moment, Kaori thinks he’s trying to sneak a sexy pic and Kousei soon becomes well-versed in Kaori’s dueling personalities. One minute she’s beating up on Kousei and the next she is loving up on Watari.

At first, Kousei just assumes Kaori is this free spirit, but then he hears her play the violin. Much of Kousei and Kaori’s first introduction centers around Kaori’s music, and it’s the music that makes their first meeting more than just cute and comical, it also makes it influential. Kousei was captivated by Koari’s unstructured style of music, a style in which he had no experience. Their first day was precious and the characters are precious in how they inspire each other. 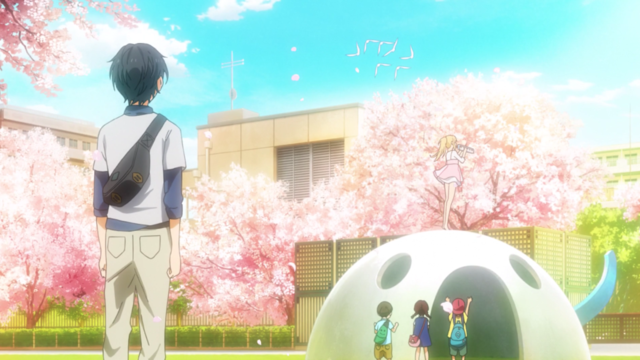 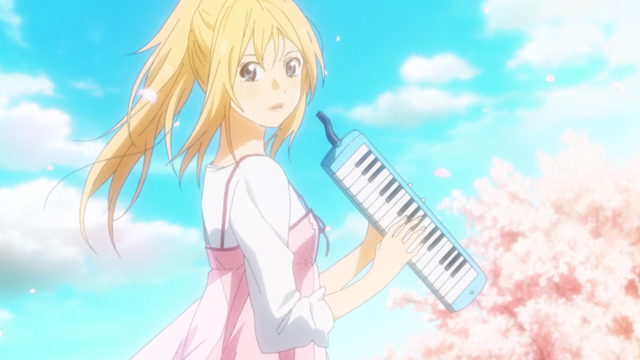 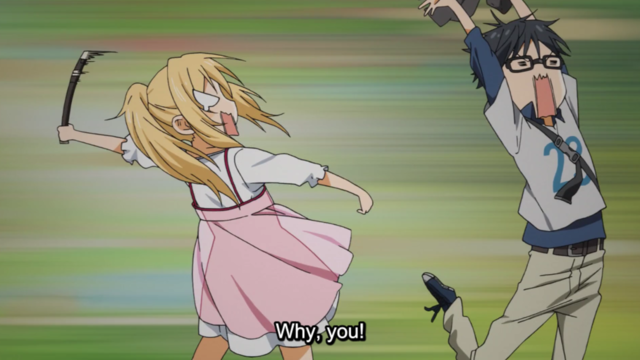 Ah yes … Clannad! Anyone who has seen Clannad knows exactly what I mean when I say how ridiculously cute and heartbreakingly sad this anime is a big part of that has to do with Nagisa and Tomoya, whose first encounter is genuine, encouraging and wastes no time introducing the lovable relationship between the two.

Tomoya has a pessimistic attitude about the way his life is going, but it’s sweet how on the way to school, Tomoya shares some motivating words to Nagisa, a girl he just met. Tomoya ends up offering some good advice about an issue that’s bothering her. This moment immediately sets up the sweet dynamic between the two, and while this instance appears simple on the surface, knowing what I know now from watching the entire series, this moment is powerful. It truly gives insight into their relationship, supporting and uplifting one another throughout their journeys. 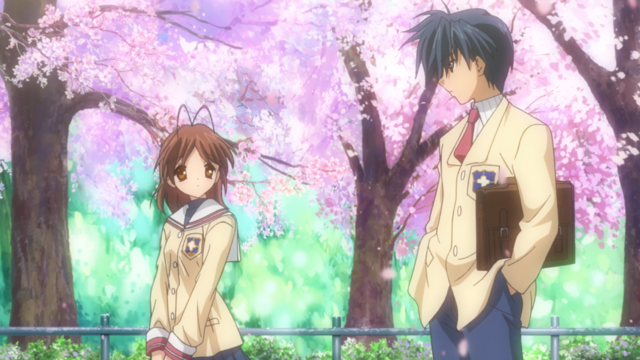 My Love Story!! is a unique series that is caring, tender, and overall filled with sweetness, and the relationship that blossoms between Rinko Yamato and Takeo Gouda are just too pure for this world!

Unlike some of the other meet-cutes where the first encounter may be awkward, comical, or playful in demeanor, Takeo literally swoops in like a knight in shining armor the first time he sees Rinko. While riding the train, Rinko is being bothered by a scummy individual. Takeo notices the despicable behavior and immediately intervenes. Rinko is not only grateful for Takeo intervening but for also not allowing the perpetrator to talk ill of her.

Takeo is someone who is introduced as having no luck with girls, and although the event leading up to how Rinko and Takeo meet is awful, what’s special about their first encounter is that for the first time, someone appreciates and respects Takeo’s kind heart instead of just taking advantage of his caring personality. As I said, Rinko and Takeo’s relationship is pure and innocent and their first meeting is all about heart and compassion. 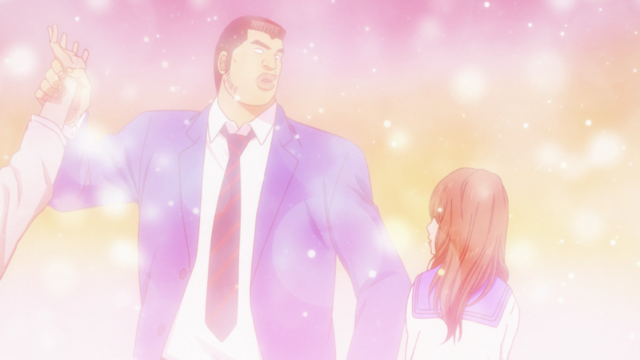 I’ll admit, Tsukasa and Nasa’s actual first meeting is incredibly wacky, seeing as the first time they acknowledge each other’s existence in TONIKAWA: Over The Moon For You, was by Tsukasa lessening the blow Nasa took when getting hit by a car and then Nasa running on pure adrenaline to find Tsukasa even though he was on the edge of passing out from blood loss. Yeah, it’s pretty kooky but oddly adorable? Okay, it’s just all kooky but what IS adorable is when Tsukasa and Nasa meet again a few years later and Nasa tries his best to make his new wife happy. 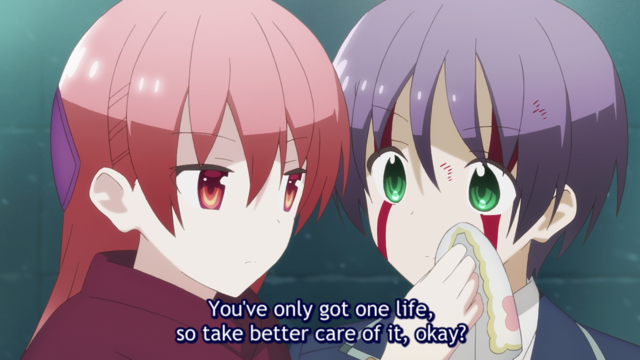 Nasa’s never had a girl over to his apartment, let alone a girl who is now his wife. The first night they spend together, Nasa follows Tsukasa’s lead, doing what he can to make the new nuptials and living arrangement more welcoming and comfortable for his adoring wife. Nasa also has no problems expressing his emotions and his feelings toward Tsukasa, and even the smallest gesture like holding hands sends him “over the moon.” Tsukasa and Nasa’s relationship moves pretty quickly, but it’s charming to watch them fully embrace the relationship. 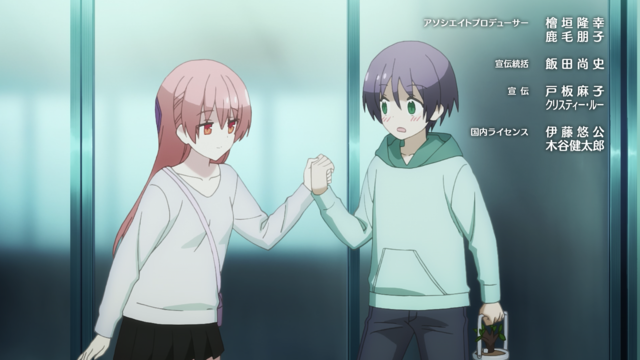 Usagi and Mamoru have one of the most iconic relationships among romance anime. While the two fight side by side for love and justice in Sailor Moon, they didn’t always see eye to eye, and their first meet up is the perfect example of that playful, teasing relationship we come to see and adore.

Usagi is pretty down in the dumps after performing poorly on an exam and tosses the disappointing test to the side. Instead of hitting the ground, it hits this oh so charming guy in the head. Depending on which version of the series you watch, you’ll witness their love-at-first-sight, butterflies-in-your-stomach moment, or Usagi taking shots at Mamoru’s iconic purple pleated pants, and of course the birth of the meatball head/bunhead nickname! 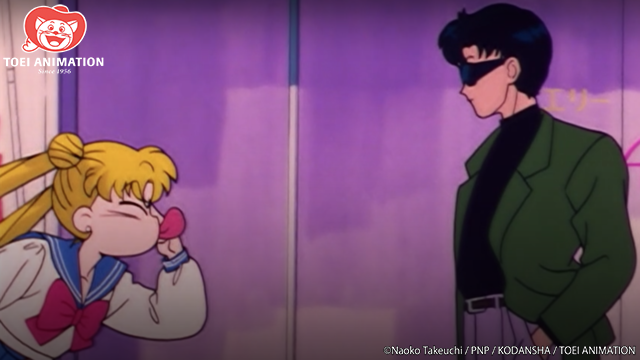 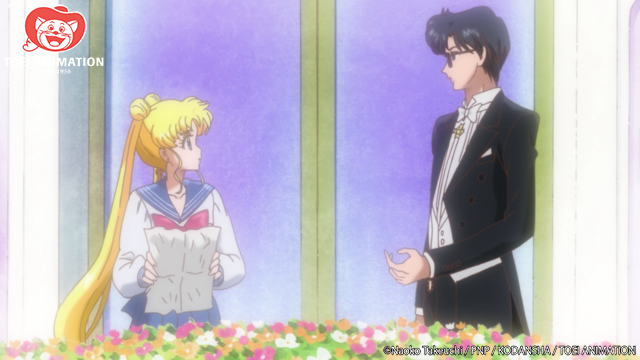 What are some of your favorite anime meet-cutes? Let us know in the comments!

Pro hero Veronica Valencia is an anime-loving hot sauce enthusiast! You can follow more of her work as a host, writer, and producer on Twitter and Instagram.