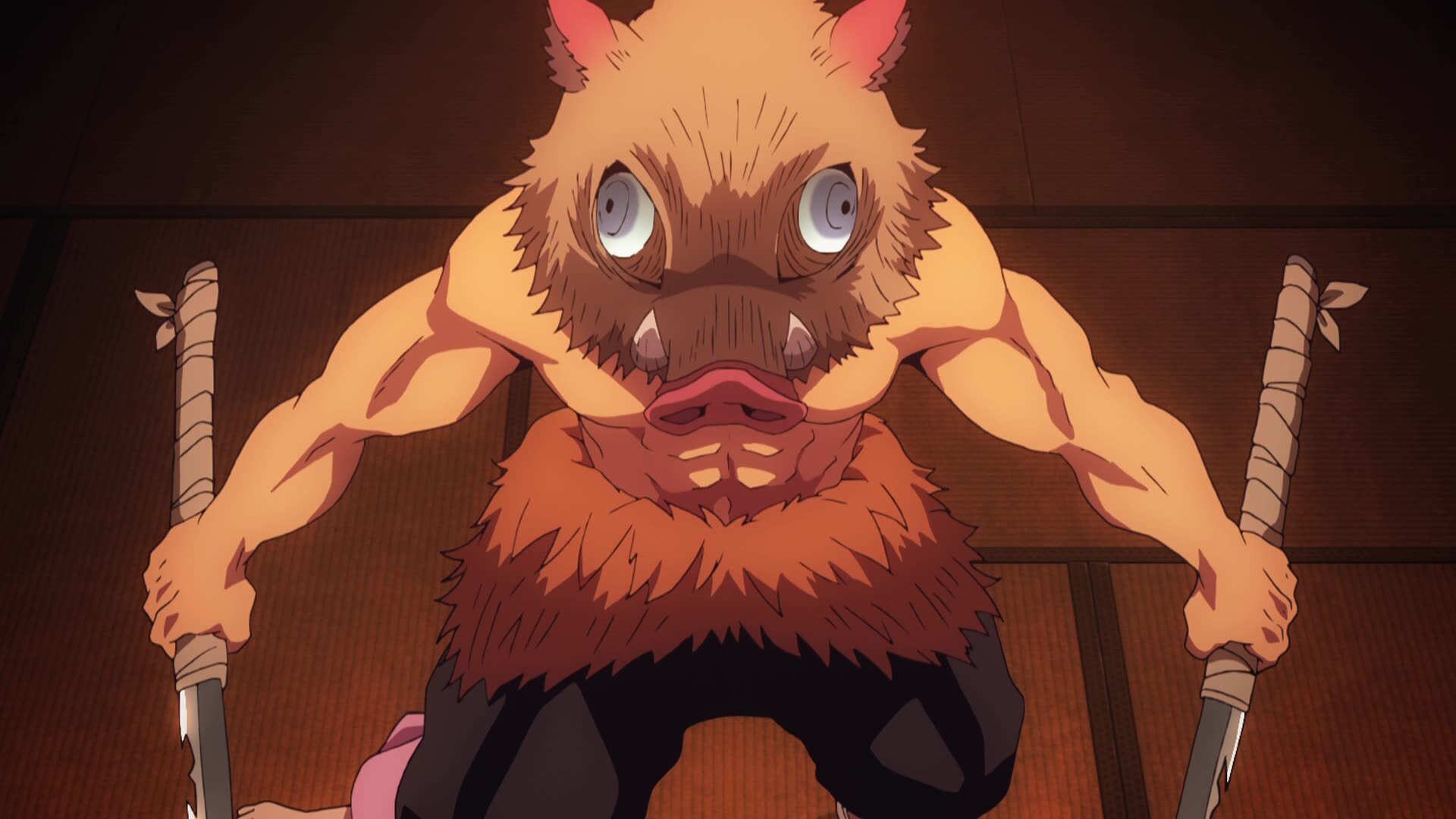 Demon Slayer: Kimetsu no Yaiba has come a long way since its early days in Shonen Jump. It is currently the 11th best-selling manga of all time, its anime adaptation a smash hit, and its follow-up film Mugen Train one of the biggest blockbusters in the history of Japanese cinema. How did this happen? Some might point to the lovable character of Tanjirou and his loyal friends. Others might gesture at ufotable’s polished adaptation, with its careful line art and well-animated fight scenes. There is some truth to both of these things. But here, in the pages of Crunchyroll News, I will make a different argument: you cannot understand Demon Slayer without talking about its cute animals. 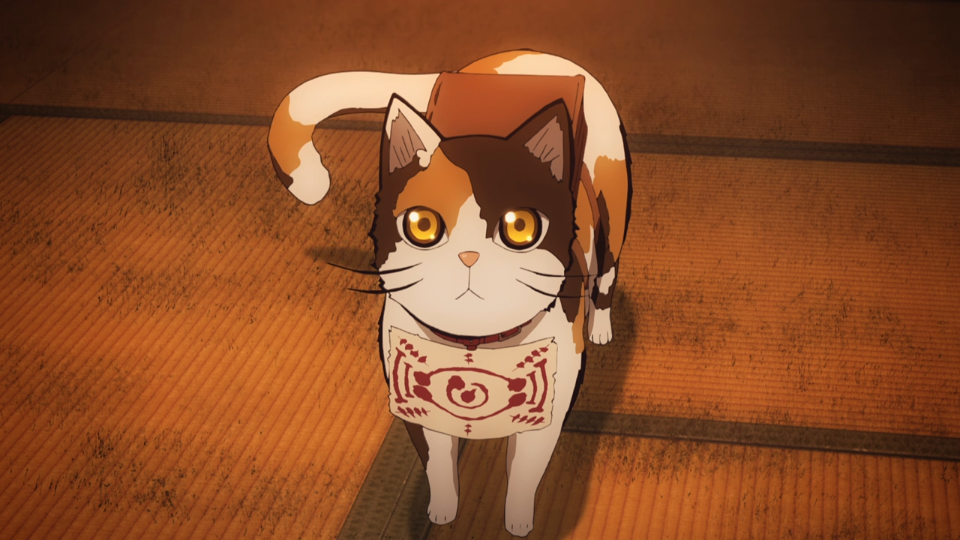 I can sense your attention drifting, reader. “Cute animals?” you say. “What about how by hearing out the personal struggles of each demon, Tanjirou demonstrates that empathy is the most powerful weapon of all?” I hear you and understand. But did you see this invisible cat? What a surprise!

Chachamaru is a cat, the personal helper of the vampiric medical doctor Tamayo. Chachamaru’s distinguishing ability is a charm it wears that allows it to appear and disappear. At the end of the knock-down fight with Kyogai, the battle in which for me Demon Slayer truly finds its feet, Chachamaru appears out of nowhere to collect a sample of blood. Having received this sample, it uses its charm to once more disappear to safety.

What is notable about Chachamaru? First of all, it is very cute. Being able to become invisible arguably makes it even cuter. The only thing more charming (and dangerous) than a house cat is a house cat that can appear and disappear at will. Imagine being Tanjirou, risking your life against a dangerous demon. Being Tanjirou, you cannot merely slay the demon and be done with it. Instead, you must understand them, and perhaps help them find some peace at the end of their days. Even a good-natured boy like Tanjirou might find themselves challenged by this situation. But then, just when he might be tired, a small tabby cat appears out of nowhere to collect the blood. How unexpected! Tanjirou suddenly feels refreshed, and just like that we feel refreshed too.

I should mention that Chachamaru is one way in which the manga, to me, exceeds the anime. The anime’s rendition of Chachamaru is perfectly cute, but nobody draws weird, blobby-but-expressive cat heads like manga artist Koyoharu Goutoge. 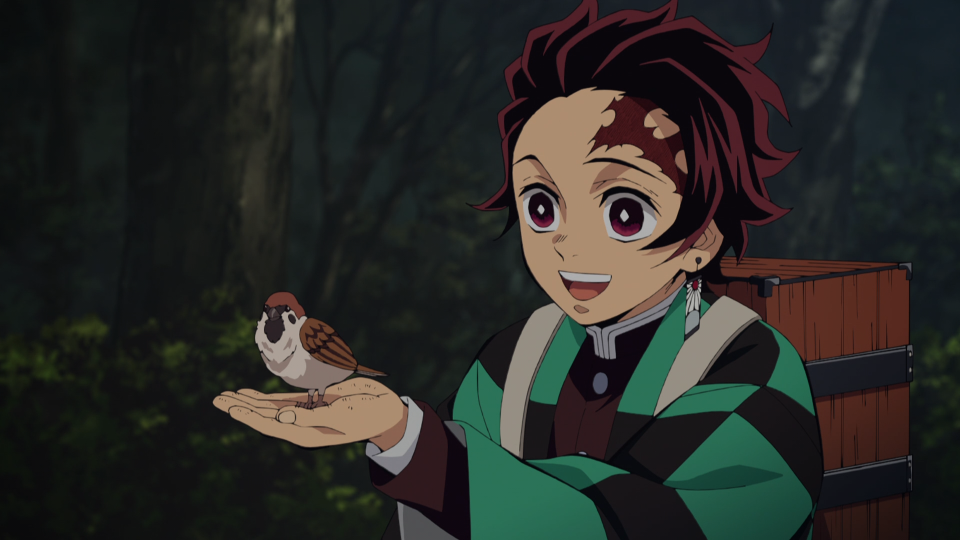 A defining trait of the Demon Slayer Corps are their crows, which carry messages back and forth and sometimes spout exposition about the setting. Tanjirou’s crow is about what you’d expect from a crow, a haughty bird that pecks him on the head during next episode previews. Tanjirou’s ally Zenitsu, however, does not have a crow. Zenitsu has a sparrow.

Compared to a crow, Zenitsu’s sparrow, Ukogi, is comparatively useless. For one thing, it cannot speak. For another, it is very small. But don’t count your chickens before they hatch. Ukogi may be small and mute, but by virtue of being a sparrow, it is still much cooler and smarter than Zenitsu. It is also an efficient visual gag, a signifier of what separates pathetic dropouts like Zenitsu from the cooler, stronger demon slayers.

Yet even a tiny sparrow like Ukogi is able to bring joy into people’s hearts. Early in the Tsuzumi Mansion arc, Tanjirou and Zenitsu meet two children who are overcome with fear. It is only by making Ukogi appear from his hands like magic that Tanjirou is able to calm the kids so they will point him in the direction of the demon that threatens their family. Ukogi may be nothing but a simple sparrow, but just like a cat, a sparrow is able to surprise. Tanjirou is one of the most beloved heroes in modern manga because he never assumes the worst of someone because they are small, stupid, or weak. It is for this reason that while his teammates and allies may be weirder or dorkier than their compatriots from other, flashier Shonen Jump stories, they would all die for him and his sister Nezuko.

The arc that directly follows Mugen Train is very good, one I’d love to see animated. But if I’m being honest, I am hoping for more Demon Slayer anime for one reason only, and that is the Muscle Mice.

What are the Muscle Mice? Once I was as naive as you. My friend who brought me kicking and screaming into the world of Demon Slayer once showed me a picture of the Muscle Mice as an example of what the manga, at its very best, can achieve. The Muscle Mice are, just like you’d think, mice with huge muscles. They do the bidding of a character who has yet to be introduced in the anime and are memorable every time they appear. They might be flexing their muscles. They might be carrying a character’s swords. How is it that through careful training, their master was able to produce two muscular mice? Your guess is as good as mine.

The Muscle Mice reveal another facet of Demon Slayer‘s appeal: it is just a little gross. Of course, Tanjirou is very nice. Of course, the characters will perform feats of superhuman skill to protect the innocent. But the series is always a little off-kilter. The arch-villain dresses like Michael Jackson and vaporizes his own troops when they fail to please him. The hero’s allies include an angry and very flexible man wearing a pig mask, and Zenitsu. The manga is packed with funny reaction faces that look more like potatoes with googly eyes attached than traditional anime-style superdeformed chibis. You might think that by calling the faces in the Demon Slayer “potatoes with googly eyes,” I am insulting them. Reader, I adore them. The anime works to capture some of this appeal, but it can’t help but streamline Goutoge’s art in the process of polishing Demon Slayer‘s rough diamond. The grottiness of the manga’s relatively unpolished designs is where the magic happens, and where the Muscle Mice dwell. 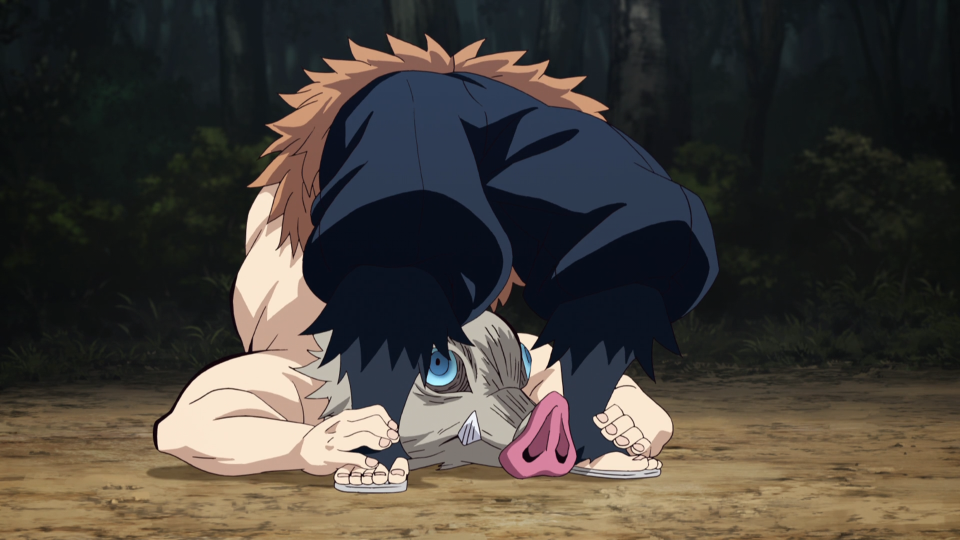 Perhaps it’s jealousy. Years ago, I rooted for Demon Slayer‘s underdog success. Now I can’t help but feel, with the massive popularity of the anime, that the invisible cat is out of the box. That what was once a closely kept secret doesn’t just belong to my friend and I anymore. But I know what Tanjirou would do: he would share. So here’s my gift to you, as a fan of Kimetsu no Yaiba to a fan of Demon Slayer. Demon Slayer is not just the astounding pyrotechnics of Episode 19. It is not just LiSA’s banging opening theme. It is a humble sparrow. It is a disappearing cat. Demon Slayer is a surprise.

A postscript. In June 2020, famed manga artist Daisuke Igarashi published an illustration honoring his love of Demon Slayer in the magazine Brutus. Featured prominently were my beloved boar fighter Inosuke, a crow and a sparrow, a fluffy cat, and two shockingly muscular mice. If you looked very closely in the lower-left corner, as well, you could, unfortunately, see Zenitsu.

What do you think about Demon Slayer? Do you wish that Chachamaru the cat had more screen time? Who could win in a fight, Zenitsu’s sparrow or Zenitsu? Let us know in the comments!

Adam W is a Features Writer at Crunchyroll. When he is not extolling the greatness of Inosuke, he sporadically contributes with a loose coalition of friends to a blog called Isn’t it Electrifying? You can find him on Twitter yelling about Wonder Egg Priority at: @wendeego