The gag manga helped to cement Fujio Akatsuka as a promising creator and its repeated jokes reverberated throughout Japanese culture. The “Sheeeh!” pose — usually performed by the self-centered Iyami — was so popular that when The Beatles toured Japan in the ’60s, they managed to get John Lennon to perform it. In 1965’s Invasion of the Astro Monster, Toho Studio’s sixth Godzilla outing, one producer adored the silly stance to the extent that he had Godzilla do it in the film. And when it came time for the esteemed Criterion Collection to release the series of Showa era Godzilla films, that pose was front and center on the artwork. 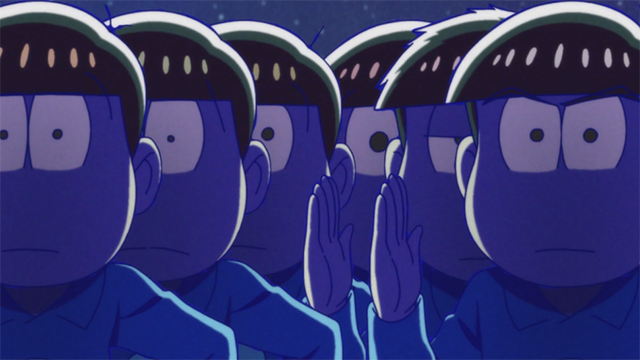 The manga would spawn two anime series, one in 1966 and the next in 1988, both titled Osomatsu-kun, and both centered on the relatively harmless exploits of the main cast of sextuplets and the peculiar people that lived near them. The manga series would last for 34 volumes and the two anime ran for 56 and 86 episodes respectively. If anything, their success is owed to the familiarity that they bred in readers and viewers. Gags are repeated, characters remain extremely consistent, the status quo is never challenged. They are funny bits of comfort food.

And then there’s Mr. Osomatsu, which takes the concept and warps it. Yes, those “six same faces” are cute when they’re on children, but what about when they’re in their late twenties and all living at home together? What if the people who live around them have only gotten more ridiculous? What if they were NEETs (Not in Education, Employment or Training)? Obviously, that last part has an extreme amount of modern relevance. News of a demographic (sometimes referred to as hikikomori) that refuses to engage in the standard rigors of society and “normal” culture, has only become more widespread. There’s an increasing fascination about people who exist in this lifestyle, especially as the ramifications of Japan’s “Lost Decade,” an era that encountered a tragic, massive recession, become clearer. 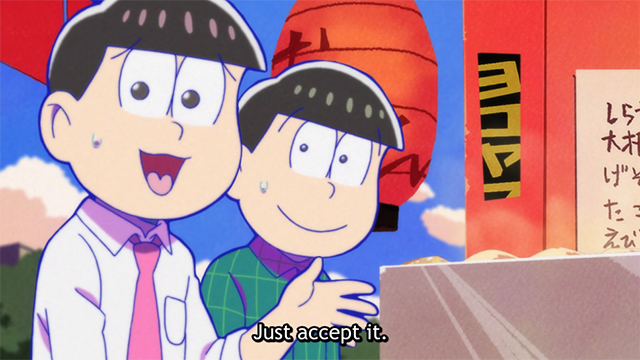 But Mr. Osomatsu is fiction, and in fiction, characters typically have goals and driving narratives. They have an arc of some sort to complete that will leave them different than they were before. The Matsu brothers don’t want this. They find it troubling that people expect them to change now that they’re adults and in the third season of a self-aware show. The first two seasons play with our expectations regarding this — both penultimate episodes dealt with the brothers separating and moving on, getting jobs, and entering “adulthood” as society deems it so. They finally have to deal with the emotional strife of saying goodbye to your home and making a life that’s your own. And then we’re reminded that this is Mr. Osomatsu, and in the season finales, the brothers are playing baseball against aliens or fighting against the devil in order to come back to life solely because they abhor the fact that they died virgins.

The brothers wish to live but they do not wish to change. They know they’re fictional characters, but they do not wish to abide by the rules of fiction. It’s horrifying when they’re asked to. The latest season finds them with two curious robot companions, and at one point the androids ask the brothers why they’ve been making fun of their supposed “friend” Chibita for so long. The brothers are stunned by this accusation. That’s just something they’ve always done. It’s not supposed to be different because they’ve never considered that it could be different, nor have they wanted it to be.

Similarly, a scene in the most recent episode sees the boys trudging back home from a wedding. At first, the tone of their conversation is light, but then they begin to ruminate on the nature of a union like a wedding – How do people do that? What would it take to find someone and live with them and love them forever? Is that even possible? They talk about it as if the pairing of two people is a supernatural occurrence. And when the episode ends, no solution is found. They’re just left wondering what’s next for them. 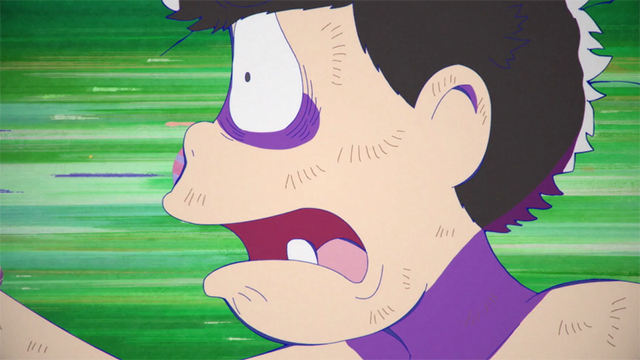 One quote that’s often attributed to Albert Einstein states “Insanity is doing the same thing over and over again and expecting different results.” And you can apply it here to the ethos of Mr. Osomatsu and the brothers themselves. They are not selfish, confused, and angry solely because they’re NEET stereotypes who refuse to change with the world, but because they don’t want their own franchise to evolve. The world is challenging and asks things of you when you’re an adult, unlike when you’re a little kid in a ’60s gag manga. And when your series has lasted over 50 years, it will also ask things of you — to look at what’s relevant and adjust. But Mr. Osomatsu refuses to.

When you watch the opening credits of Season 3, which feature the boys desperate fleeing their own iconography, it’s hard not to think that what they’re running from is the pressure of fiction and of the world they reside in. In the beginning, it was Fujio Akatsuka’s decision to render them as fixed aspects, running through popular routines that audiences loved. But now, according to Mr. Osomatsu, it’s the brothers’ decision, and it’s a far more interesting show for it.